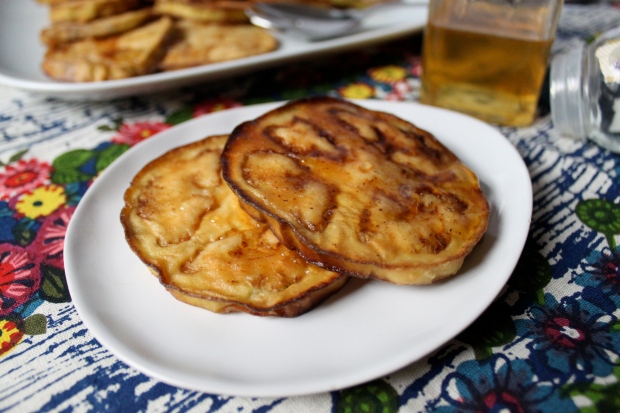 Normally, I  jump around the globe but virtual travel can be exhausting and with our seasons aligning I wanted to linger in Spain awhile longer. I rescued the eggplants I’d bought from last week’s pisto manchego partly to try this Andalusian recipe for eggplant fritters drizzled with honey from Claudia Roden’s The Food of Spain and partly because my sister said they looked like little witches lined up in a row. Either way, they were ripe to stand on their own. 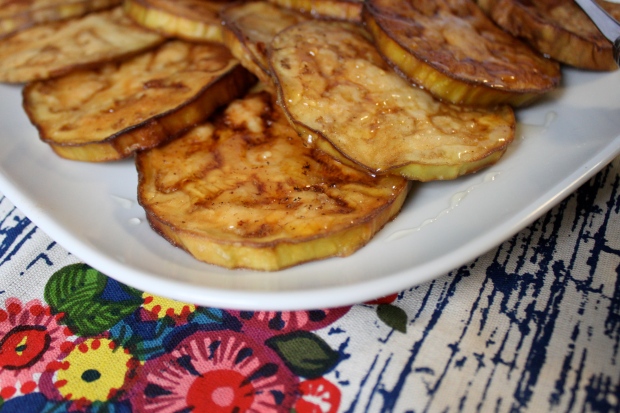 While I love eggplant, I do not love to cook with it – usually having trouble from the first peels which fail to leave the eggplant as smooth or bruise free as I’d like. Sauteed or fried, they never cook quickly as promised, regardless of the recipe, or else demand more oil than I feel comfortable using for a light summer pasta. To solve this problem, Roden soaks the slices in milk beforehand and lightly dredges them in flour so they brown quickly without taking on too much oil, a technique she learned in Córdoba. 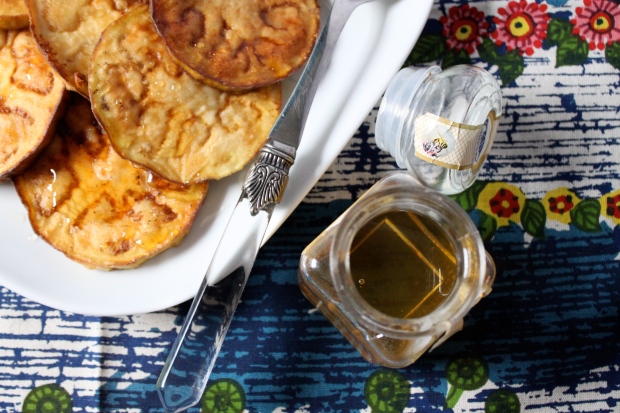 I still had a moment of doubt when the first batch started cooking and considered quickly dipping them in batter before committing the rest to the fryer. Hot from the oil, I drizzled a small slice with honey. From the first bite, I loved the barely there crispness of the flour coating encasing the creaminess of the eggplant – something like French toast with a savory finish – so they went in as is. Immediately addictive, I hurriedly took pictures while the pile I had set out got smaller, and smaller.

Berenjenas con Miel/Eggplant Fritter with Honey
Barely adapted from this recipe from Claudia Roden’s The Food of Spain. Instead of honey, the eggplant can also be served with molasses or melao de caña.

Peel the eggplants and cut them into 1/3″ slices. Put them in a large mixing bowl with enough milk to cover. Place a small plate over the slices to keep them submerged for 1-2 hours then drain.

Cover a plate or pan with about one cup of flour sprinkled with salt. Dredge the sliced in the flour to cover all sides then shake off the excess.

In a heavy skillet or deep fryer, heat 2 inches of oil over medium-high heat so the eggplant slices sizzle when they touch the oil. Working in batches, add 4-5 slices at a time, turning them with a slotted spoon until they are lightly browned, about 1-2 minutes on each side. Be careful not to overcrowd the skillet or the oil temperature will fall and the eggplant will absorb too much oil. Remove the eggplant from oil and drain on paper towels or wire rack. Drizzle with honey or molasses and serve warm.