Posts from the ‘Light Lunch’ Category 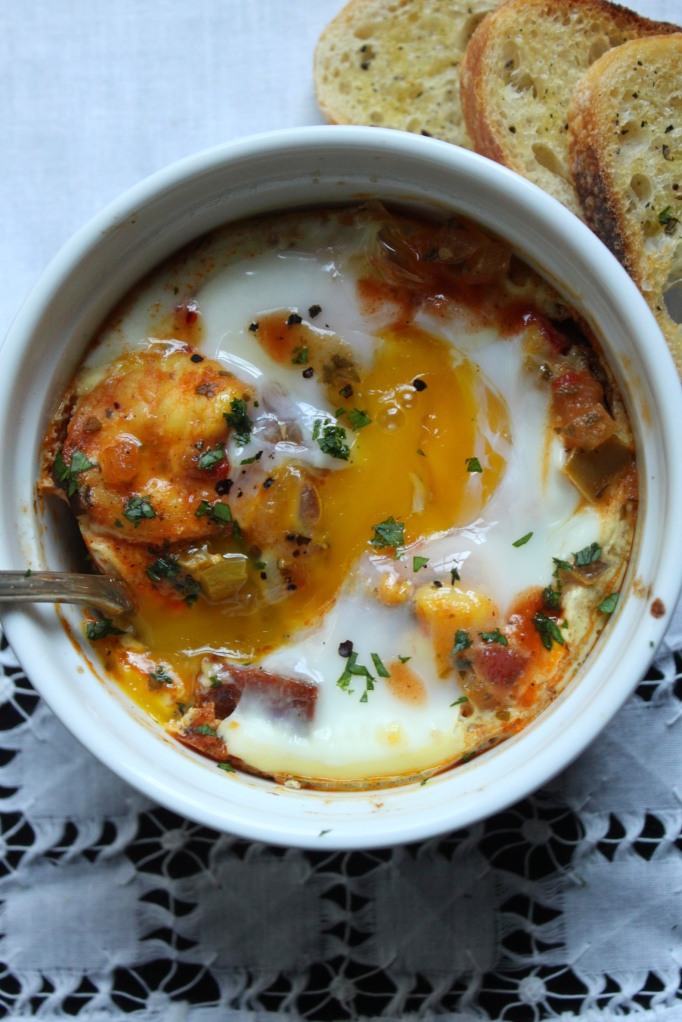 It was unmistakable.  There was a chill in the air this morning.  Not a breeze, not a nip, but a chill.  This summer went by fast for me and being in the final stretch of recipe testing and writing has only accelerated it.  This week I was looking for a substitute for the Cuban aji guaguao and was told that tabasco peppers should work.  I stopped by a few of my favorite markets but they didn’t carry them.  Earlier this year, I was supposed to visit the McIlhenny Company‘s tabasco pepper fields in Louisiana but the trip was postponed until October.  At the time it felt like a long ways off but now it couldn’t come soon enough.  With New York produce failing me, I couldn’t wait to be where tabasco peppers were literally growing on trees (or bushes – not sure because I haven’t been there yet). END_OF_DOCUMENT_TOKEN_TO_BE_REPLACED

When talking about regional Latin American food, the subject of heat is polarizing, especially for those countries who don’t really use it.  Viewed as a generality that paints us all with the same brush and overlooks an incredible diversity of ingredients and flavors, most people, myself included, are quick to point out that Cuban food is spicy but not hot – though that’s not entirely true either.  While it’s kept out of many traditional recipes, peppers pop up in the food of eastern Cuba and a few drops of hot sauce always work their way into camarones enchilados.  I may balk at adding chipotle mayo to my Cuban sandwiches, but a small red bottle of Tabasco sauce stands guard at most Miami lunch counters.  Still, when I was asked to develop a few recipes for McIlhenny Company’s Tabasco, I was hesitant at first.  Deep into an intense recipe testing period, I didn’t see a way of working it in until I made pulled chicken cooked down with guava barbecue sauce.  Spiked with a good dose of heat, it stood up to the guava paste, cut through the sweetness, and sharpened the flavors.  It’s was a good enough reason to draw outside the lines. Happy Fourth! END_OF_DOCUMENT_TOKEN_TO_BE_REPLACED

A couple of springs ago, I went behind the Solber Pupusa stand at Ft. Geene’s Brooklyn Flea to learn how to palmear or shape their famous corn flour cakes.  I loved the process of mixing up the dough with my hands, tucking in the filling until it looks like an overstuffed dumpling, then passing it back and forth until it was a smooth disc again.  They were like the play-dough cakes I would have made as a kid except they turned into something you’d actually want to eat.  The first one weren’t very pretty but they improved with practice. END_OF_DOCUMENT_TOKEN_TO_BE_REPLACED

Summer seems to be about buying fresh ingredients and getting out of their way – charring and grilling, chilling and serving. Though suitable for the time and the produce available, I still miss getting lost in my kitchen and was looking for a project when I decided to try a variation on Peruvian causa I’d seen on Yanuq.  In addition to the usual mashed potatoes, lime juice, and ají amarillo, pureed beets are added to the mix, making it all go pink – a potato salad in Batman technicolor. END_OF_DOCUMENT_TOKEN_TO_BE_REPLACED 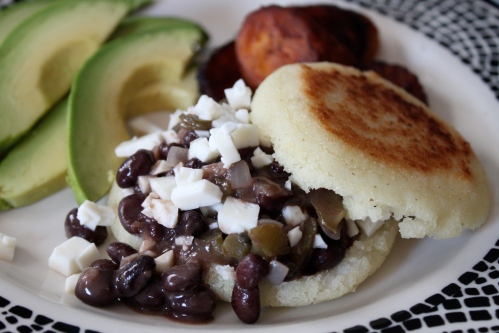 I was working on a post on the Latin pantry for Devour the Blog when I decided to take a look at my own. I’m constantly straightening and organizing my shelves in the on-going game of kitchen Jenga that my limited New York storage space forces me to play.  I can’t complain though because a few years ago my cupboards would have been bare. It took me awhile to figure out what I like, how I should store it, and how often I would use it. I hate waste and there were a few forgotten items staring at me resentfully from behind the much loved olive oil and sea salt, but I think I got it down to the essentials. I don’t know if it’s pure projection or all those chiles and peppers, but Latin American products seem to vibrate just a little bit more than others. I feel like if I winked at the woman on the P.A.N. Harina bag she just might wink back and I’m also absolutely terrified of the Abuelita on Nestlé’s Mexican chocolate discs though I’m sure she means well. END_OF_DOCUMENT_TOKEN_TO_BE_REPLACED

I love the holidays but so much joy can be exhausting.  The things I normally love doing – seeing friends, decking the halls, shopping, traveling – become stressful when done for 31+ consecutive days.  I miss my kitchen and get in a panic about getting home too early to sleep and too late to cook.  Faced with the prospect of nighttime pop tarts (organic maybe but still) and cold bowls of cereal, I opted for tortilla de papas instead. END_OF_DOCUMENT_TOKEN_TO_BE_REPLACED

Stuffing, cranberries, and sweet potatoes go fast but there’s always more turkey. I haven’t re-posted often but this weekend has been all about leftovers so it made sense to test out my bread making skills, practice my sandwich pressing, and revisit Elena Ruz.

The Elena Ruz sandwich always seemed a little out of place on the menu.  A combination of roasted turkey, cream cheese and strawberry preserves, it floats alongside the heavier ham, lechon asado and cheese melds of Cuban lunch menus – lighter and prettier with a first and last name.  Named for Elena Ruz, a Havana socialite who had the unusual combination made to order for her at El Carmelo.  Then a fashionable cafe in the 1930s, it landed on the menu becoming a popular item.  According to later interviews, her parents were scandalized to see a sign for “Sandwich Elena Ruz 25 centavos” on display, though as she pointed out the other sandwiches only went for 10 cents at the time.

END_OF_DOCUMENT_TOKEN_TO_BE_REPLACED 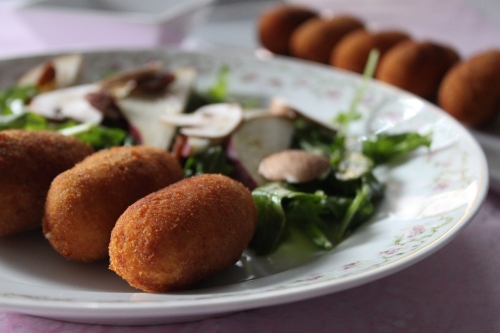 When chef Michelle Bernstein described Miami’s lunch counter croquetas as “leaden”, I hated to admit that she was right.  Made of pureed ham, chicken, or beef, they’re often left to sit out in glass cases for hours.  Even if you’re lucky enough to come across a freshly fried batch, it’s more ham spread than creamy béchamel.  On a recent trip home, I had one from an otherwise good bakery filled with a flourescent paste that could not have possibly been found in nature.  Sold in large trays for family parties, the tiny versions pack an even weightier punch.  Still, I haven’t given up on them yet.  Using any excuse to visit the crowded coffee stands and bakeries that dot Miami, they’re usually the first thing I ask for when I land and the last thing I pick up on my way to the departure gate.  END_OF_DOCUMENT_TOKEN_TO_BE_REPLACED

A friend from Seattle once described his family’s Christmas tree ritual.  Every December, they’d go to the woods, pick a tree, argue a little, cut it down, then bring it home where they’d have hot chocolate together.  A lovely story, but so wholesome, it seemed exotic.  Told to a bunch of urbanites who believed Christmas trees sprouted up spontaneously from the sidewalks in front of grocery stores once a year, we wanted to know if there was a designated “tree section” of the forest.  That’s the way I felt about making my own gravlax which I’d only bought pre-packaged and ready to serve (random connection I know but they’re both related to the Pacific Northwest).  I love sushi, ceviche and all things smoked and cured, but when it comes to fish, I relied on chefs and Nova Scotians to tell me when it’s raw and when it’s lunch.  This week I found a recipe for tequila-cured salmon topped with mango and lime relish that changed my mind. END_OF_DOCUMENT_TOKEN_TO_BE_REPLACED

I could never take food for granted.  There’s always something to learn, and I’m constantly surprised.  I knew that empanadas were a specialty of Galicia, but I didn’t realize they’d partly originated there.  I also didn’t know the “empanadas” I’d grown up with were actually empanidillas, smaller versions of the larger pies that Galician bakers first sold to pilgrims on the road to Santiago de Compostela (a detail that make my history-major-geek heart beat faster).   Fortunately, they never stopped moving, spreading across Latin America, baked or fried, in a million different variations. END_OF_DOCUMENT_TOKEN_TO_BE_REPLACED
« Older Entries