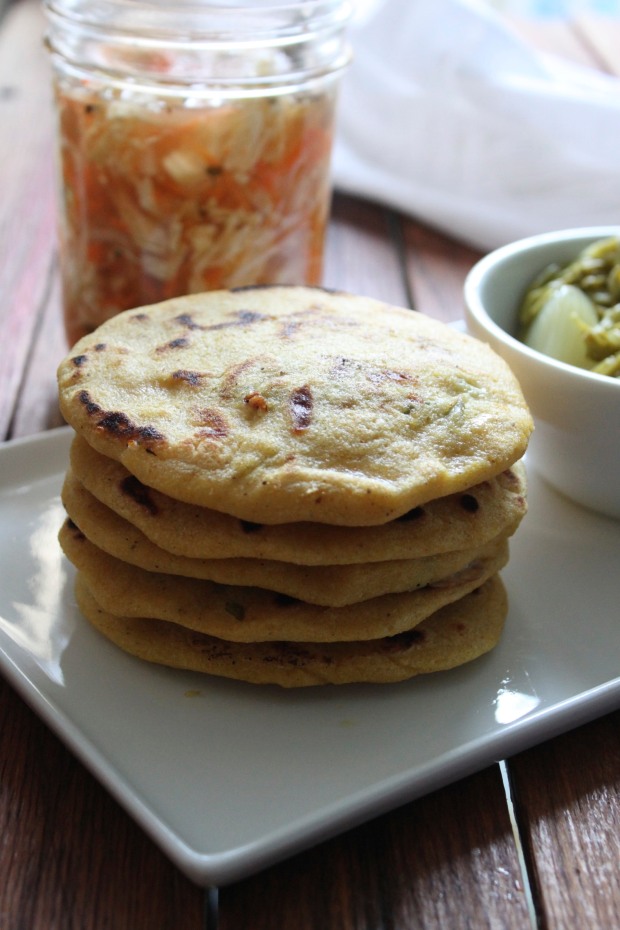 A couple of springs ago, I went behind the Solber Pupusa stand at Ft. Geene’s Brooklyn Flea to learn how to palmear or shape their famous corn flour cakes.  I loved the process of mixing up the dough with my hands, tucking in the filling until it looks like an overstuffed dumpling, then passing it back and forth until it was a smooth disc again.  They were like the play-dough cakes I would have made as a kid except they turned into something you’d actually want to eat.  The first one weren’t very pretty but they improved with practice.

It was exactly that kind of practice that I’d been lacking since.  This weekend, when I came across Saveur’s masa cakes with spicy slaw, I realized I had just enough masa harina to get some turns in before I lost all my skills.  Like I learned at Solber, I added a small amount of oil to the mix and a little bit more to my hands when I shaped the dough.  It helped me pass them back and forth easily and they browned nicely as soon as they touched down on the cast iron pan.  I also had a full jar of flor de loroco so added them to them filling as well.  Only available frozen or jarred in the States, woodsy and acidic loroco flowers are not nearly as delicate as the edible blossoms girlishly peeking out from under the micro-greens at the farmer’s market.  Still what they lose in prettiness, they make up for in flavor.

Pupusas de Flor de Loroco y Queso
Adapted from Saveur’s Masa Cakes with Spicy Slaw (Pupusas con Curtido).  The original curtido recipe called for crumbled árbol chiles in the slaw which I left out so they wouldn’t overpower the cheese-loroco filling so I left it out.  I also warmed up some tomato sauce and added cream as a topping the way they do at the ballfields.

To make the curtido, combine the white wine vinegar, sugar, oregano, chiles, carrots, onions, and cabbage in a bowl.  Season with salt, toss, and let chill.

To make the dough, combine the masa harina with lukewarm water, oil, and salt.  Knead the dough until it’s well combined, smooth and pliable.  Cover and allow to rest for 15-30 minutes.

With wet or lightly oiled hands, scoop out a small amount of dough (about a ¼ cup) and shape into a ball.  Begin to palmear, lightly pressing it back and forth between your palms, rotating the dough to form a round disc, about a 1/4-inch thick.  Cup the flattened disc in your hand to form an oval and add the shredded cheese and loroco to the center.

Tuck the filling down as your gather the dough at the top to seal.  Shape the filled dough into a ball then re-flatten into a disc by repeating the process. Repeat with the remaining dough.

Heat a comal or cast iron skillet, over medium-high heat.  Brush lightly with oil and cook pupusas until lightly browned, about 4-5 minutes each side.  Serve warm with curtido (pickled cabbage), tomato sauce, and crema.