If I’ve been hard-selling farmer’s markets in the last couple of months it’s because I can’t remember a summer where I’ve taken this much advantage of them. It’s partly my dog’s fault. Orfeo Perro gets very fast walks during the week so Sunday mornings we go the long way around Carroll Park to the small market that sets up there. This should be a happy time for both of us but rarely is. The smell of sizzling turkey sausage goes to his head and I have to watch him so he doesn’t gobble up the samples (toothpicks included) that fall to the sidewalk or, even worse, get gobbled up by the much bigger dogs for whom he is a delicious turkey sausage. To make matters worse, he thinks nothing of snatching at animal crackers, cheerios and anything else that sticks out of a passing stroller. I work my way through the market in a series of tugs and apologies but that’s my dog – marking his territory and taking candy from babies.

Of course it helps to know what I’m looking for and this weekend I had a list (which I left at home but memorized in the act of writing out). I considered blending a batch of gazpacho to take advantage of the heirloom tomatoes that have been coming in but wanting something a little more versatile, I made pisto manchego instead. Traditionally, pisto is a sofrito that just keeps going – a combination of onions, tomatoes, zucchini, and fresh peppers sauteed in olive oil to the point of collapse. Most of the work is in preparing and chopping the vegetables. Whatever trouble Orfeo causes on our walks, he’s very helpful in the kitchen – attentive and quick to pick up any food I accidentally drop on the floor whether I want him to or not.

While most pisto recipes follow a similar pattern, the vegetables added to the oil in stages, I decided to make Anya Van Bremzen’s version where the tomatoes are passed through a box grater first. A small detail I know, but it solves a problem. Whatever heirloom tomatoes gain in flavor they lose in looks so that once I’ve cut around the crags and dents, I have very little tomato left. I found some Italian Heart tomatoes that had incredible flavor but – true to their name – would have been impossible to dice evenly. Quickly passed through a grater, the pulp and juices collected in a bowl, I was left with just the thin skin of the tomato without having to blanching or peeling. 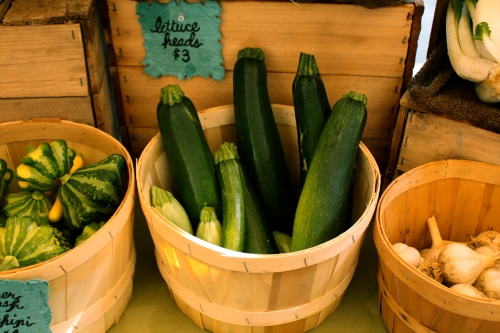 Eggplant can be added but a lot of Spanish recipes then reclassify it as ratatouille or pisto al estilo frances and besides I had other plans for the eggplant. I could have also added fried or roasted potatoes but wanted to have the option of folding it into a crepe or adding it to pasta later in the week so I kept it as simple as possible. Since Sunday, I’ve had it with poached eggs, added squash blossoms and folded it into a quesadilla, and thrown in browned chorizo. With very little pisto left but few zucchini and tomatoes summer days to go, I think Orfeo and I are going to hazard another market trip round this weekend.

Pisto Manchego
Barely adapted from The New Spanish Table by Anya Von Bremzen. The pisto can be simmered down to an almost jam like conistency or undercooked so that the vegetables are soft but still retain their shape for a more textured stew. I knew I was going to be reheating it often so I left it a little soupy. I also added additional zucchini because I overbought and wanted to have a larger quantity on hand.

Dice all of the vegetables in 1/2″ pieces and set aside. Pass the cut tomatoes through a box grater, reserving pulp and juice and discarding the skin.

In a large, deep sillet, heat the oil over medium heat. Add the onions and sautee until they begin to soften, adjusting the heat so that they don’t brown, about 7 minutes. Add the diced peppers and zucchini and continue to sautee until the vegetable soften, about 10 minutes. Stir in the garlic and continue to cook about one minute. Add the tomatoes. Cover the pan and lower heat to a steady, slow simmer. If the pan dries out, add one tablespoon of water and continue to cook until the vegetables are tender, about 35-40 minutes . Stir in red wine vinegar and a pinch of sugar to taste. Season with salt and freshly ground pepper.

Bring to room temperature and serve on its own, with poached or fried eggs, roasted or fried potatoes, and plenty of bread. It can be served warm or cold.