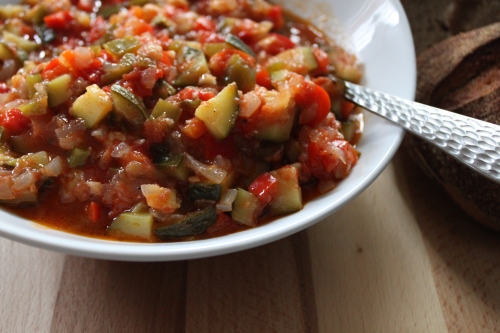 If I’ve been hard-selling farmer’s markets in the last couple of months it’s because I can’t remember a summer where I’ve taken this much advantage of them. It’s partly my dog’s fault. Orfeo Perro gets very fast walks during the week so Sunday mornings we go the long way around Carroll Park to the small market that sets up there. This should be a happy time for both of us but rarely is. The smell of sizzling turkey sausage goes to his head and I have to watch him so he doesn’t gobble up the samples (toothpicks included) that fall to the sidewalk or, even worse, get gobbled up by the much bigger dogs for whom he is a delicious turkey sausage. To make matters worse, he thinks nothing of snatching at animal crackers, cheerios and anything else that sticks out of a passing stroller. I work my way through the market in a series of tugs and apologies but that’s my dog – marking his territory and taking candy from babies. END_OF_DOCUMENT_TOKEN_TO_BE_REPLACED