There’s always a point when I finish a post and choose a country category that feels a little dishonest.  Well not so much dishonest but not the whole elephant either.  When I decided to write about Latin food, I knew that it would be a fuzzy focus and difficult to define.  Buñuelos, fritters popular throughout Spain and Latin America, are a good example.  Originally from the Iberian penninsula, they’re either Arabic or Sephardic, or maybe both.  Typically made from a wheat-based dough that’s flavored with anise, they’re rolled into balls or discs and deep fried then topped with a syrup or honey. Colombians add cheese and have them with natilla at Christmas while Mexicans sprinkle them with cinnamon and sugar and have them for New Year’s in Oaxaca.  In Catalunya, bunyols de Quaresma are typical during lent and Turkish Jews prepare them with matzoh meal for Passover, to name just a few examples.

I’d always thought they were simply Cuban and decided to try making them after writing about Argentina’s Ñoquis de 29 tradition.  Similar to ñoquis, we add flour to boiled yuca and malanga to form a light dough that’s shaped into figure eights and covered in syrup.  When I went in search of ingredients, the Mexican grocer wrongly told me the piles of yautia weren’t the same as malanga.  The Puerto Rican bodega next door was able to clear up the confusion.  What Cubans call malanga is yautia in Puerto Rico and elsewhere.  Puerto Ricans also have malanga but they’re referring to a different root vegetable (please don’t ask me what because I haven’t gotten that far).  While these buñuelos aren’t the only version, they are classically Cuban and simultaneously from everywhere else. 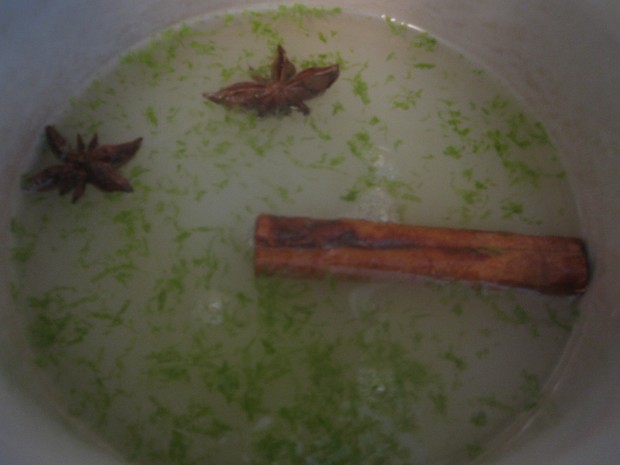 Peal and chop yuca and malanga into chunks.   Cover with water and 1 teaspoon of salt.  Bring to a boil then lower heat and simmer covered an additional 20 minutes till tender.  Force through ricer or food mill into sheet pan while still warm, spreading in an even layer. Cool completely.

Beat together egg, anise, and 1 teaspoon of salt in a small bowl.  On a lightly floured board, gather pureed vegetables into a mound on sheet pan and form a well in the center.  Pour egg mixture into well, then knead into vegetables. Knead in flour until mixture forms a smooth but slightly sticky dough. Dust top lightly with some of flour.

Cut dough into pieces. Form 1 piece of dough into a 1/2-inch-thick rope on a lightly floured surface and shape into a figure 8.

Carefully add buñuelos to oil 3-4 pieces at a time and fry till golden, turning occasionally, about 3-4 minutes.

To make the syrup, combine all ingredients except for vanilla in a heavy saucepan and bring to a boil.  Cook until it reaches the thread stage (230° F).  Remove from heat and add vanilla while still warm.  Serve with fried buñuelos.