Taking on Mexico: The Cookbook 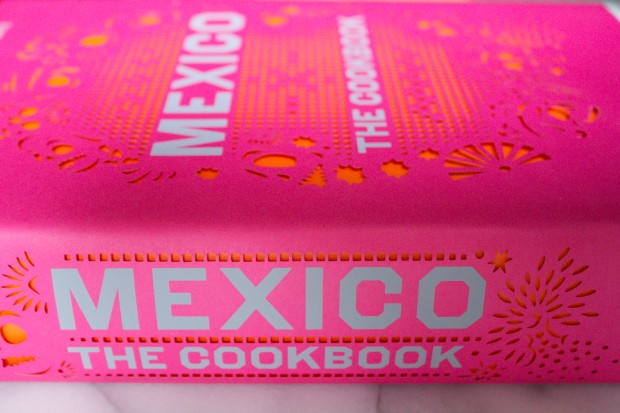 A few years ago, I found myself climbing El Cuauhcalli, an Aztec Temple of Eagle and Jaguar Warriors. They called it a pyramid but it was really a series of narrow steps and terraces carved into the mountainside built on the Cerro de los Idolos’ ceremonial – now archeological – site in Malinalco, a small town southwest of Mexico City. The security guard at the entrance swore it would take a brisk 20 minutes to climb the 400+ steps.  I still don’t know why he lied to us. We’d arrived late and the ferocity of the midday sun almost stopped us before we began, until we saw a group of pilgrims, dressed completely in white, who were doing the same hike, singing and blissfully barefoot. There was no turning back – we followed the ghosts. 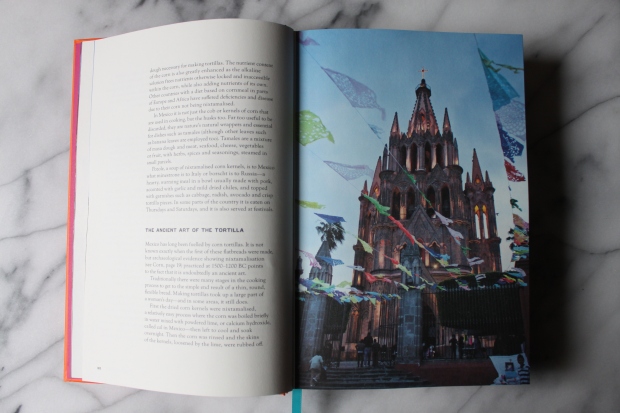 The memory of this this day came back to me when I started cooking from Margarita Carrillo Arronte’s uncompromising Mexico: The Cookbook. Typically, I’ll ping through the different sections of a new cookbook more or less knowing what I’m looking for before quickly settling on a recipe and moveing on. But with over 600 recipes and weighing in at 5 hefty pounds albeit wrapped in a delicate papel picado, there’s no skimming this one. I’ve started the day with eggs and chorizo, splurged on the beef tenderloin with a mescal rub, de-fanged nopales for cactus soup, and filled my house with smell of homemade chipotles en adobo. I can’t remember the last time I cooked continuously from the same book and it feels like I’ve barely cracked it.

It was hard to pick just one to share but I finally chose gallina en huarache, a traditional dish from Aguascalientes. There was something in the balance of sweet and savory, old and new world ingredients in the recipe that felt right for the in between season we’re having. And then there was the name…chicken in sandals.  How cute. There is very little in the way of headers or explanations in any of the recipes – just the region, prep and cooking time, and number of servings. Intimidating at first, there’s a directness and simplicity to the recipes, no matter how baroque, that makes you want to keep going, one step at a time. 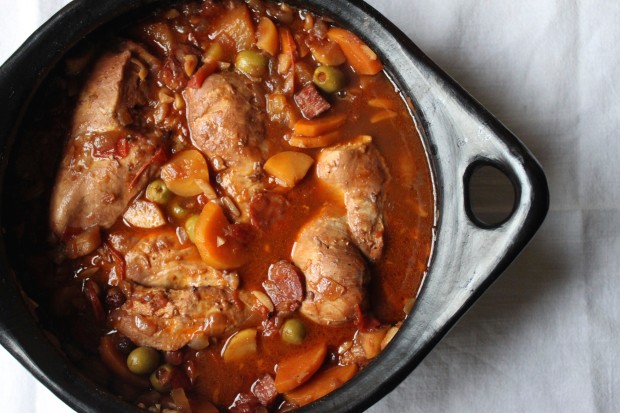 Melt the butter in a flameproof terracotta pot or saucepan. Add the onion and garlic and cook over low heat, stirring occasionally, for 8-10 minutes, until lightly browned. Add the tomatoes, ham, and chorizo and cook for an additional 10 minutes.

Remove and reserve 2 cups (16 fl oz/475 ml) of this mixture. Cover it so it stays warm and leave the rest in the pot. Add the chicken to the pot, putting it on top of the fruit mixture. Pour in in the wine, cover, and simmer for 35 minutes or until the chicken is tender and cooked through. Season with salt and pepper.

Remove the pot from the heat and serve immediately with the reserved ham, vegetable, and fruit mixture.

Note: I stopped by so many markets the day I made this but always managed to forget the capers. I used olives instead but would not make that substitution in the future.