I had planned on a seamless travelogue describing my recent trip to Mexico City – from pre-boarding expectations to new discoveries and life changing insights. But if time stops while you’re on vacation, it goes into fast forward as soon as you get back, so it’s only now that I’ve had a chance to really get back to posting. Visiting for the first time, I wanted to be like Cantinflas‘ Passepartout in Around the World in 80 Days – taking in the countryside as it gracefully glides past, dancing on tabletops, and jumping in bullrings – but more often I was Niven’s Phileas Fogg, nose buried in my moleskin diary planning the next step. I was shaken out of this by the actual Cantinflas in the form of an enormous bronze statue of the actor Jose Moreno in the Zona Rosa. I was fidgeting with my camera and almost missed it altogether. When I finally looked up, he’d turned his back to me – I was disappointing both of us. Thinking too much of what I might be missing, I wasn’t seeing what I had right in front of me. I put the camera down and looked around.

We hadn’t expected to have much time in the city. My sister and I made the trip for my cousin Caro’s birthday party and were supposed to leave for their country house in Malinalco, almost two hours away, early the next morning. When our departure was delayed, we had a few stolen hours to sightsee – then acted like we were, in fact, stealing something, moving swiftly from the outdoor installations along the Paseo de la Reforma to the Museo Nacional de Antroplogía and the Pintura de los Reinos exhibit at the Palacio de Cultura Banamex. Not stopping until we reached the Zócalo, we visited the Metropolitan Cathedral and Templo Mayor before heading to the Palacio Nacional to see Diego Rivera‘s frescos – going down a side alley set to the most perfectly synchronized street seller symphony I’d ever heard. What we didn’t do was eat.  Apart from an amazing welcome lunch and late night stop at a taqueria the night before – where I learned one should always say yes to a second (or third) taco al pastor – there just hadn’t been time. Racing home, we made it just it back just before we had to leave again. 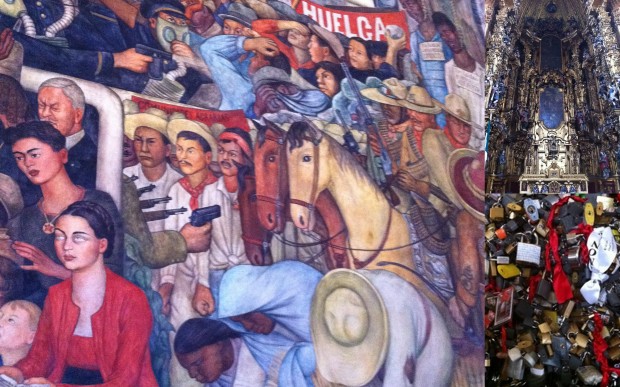 If Mexico City was another world, Malinalco was another planet. Home of the goddess Malinalxóchil, the town is set in a valley surrounded by purple mountains (or maybe just temporarily tinged lavender from the blooming jacarandas). With a reputation as a pueblo mágico, the central square faces a 16th century Augustinian convent with beautifully restored herb and flower frescos – centuries-old epemerality. After settling in, we went to Los Placeres just off the plaza. A series of small plates, mostly ordered for me, seemed to come and go at will – black bean puree topped with hibiscus leaves and bacon, light as air stuffed plantains, tequila with an orange-lime-tomato juice sangrita on the side – we ended the day tired but sated. 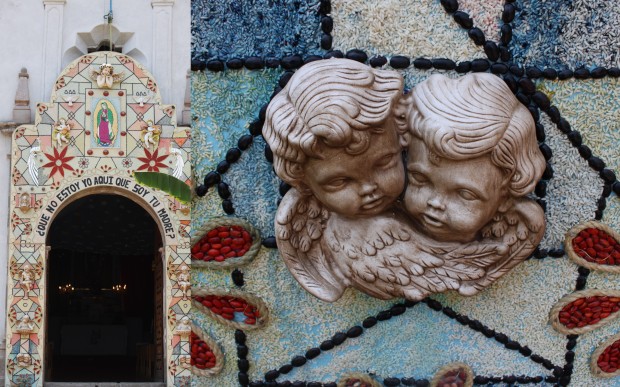 The next morning we headed to the open air market first. I was able to get a few pictures but don’t think I could do it justice – the blackberries were the size of plums, the toys were poised to reanimate, and the sauceboats had antlers (of course I bought one). Stopping for blue corn gorditas stuffed with fava beans and topped with añejo cheese, we were pushing our time limits but wanted to explore a little more.  Before turning back, we stopped into a smaller church dedicated to Our Lady of Guadalupe. Less gilded than the Baroque churches we’d seen, I fell in love with its jewelike tones, rice and bean facade and tulle canopy. Leaving the main archaeological site for another day, we raced back to the house for Caro’s party. 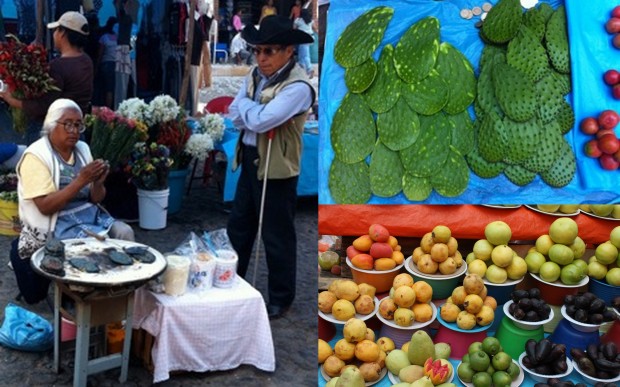 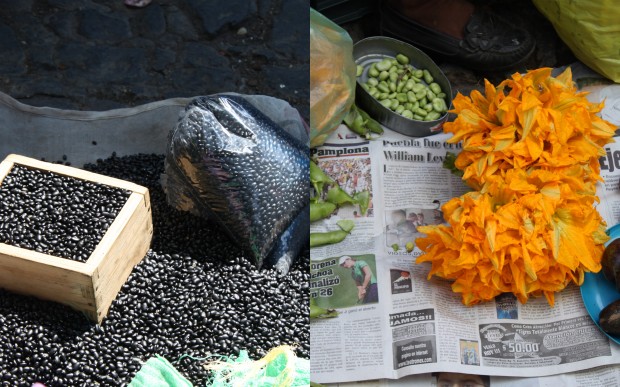 Of course, I thought she was kidding when she promised to recreate Havana’s Bodeguita del Medio in the middle of a golf course. I also thought her husband wasn’t serious when he stated matter-of-factly that the party, which started at 2 in the afternoon, would keep going until well past 3 in the morning. They weren’t. Sticking to her theme, she started us on mojitos and Cuban style appetizers early then followed it with picadillo and congri for lunch and white chocolate dominos and guava pastries for dessert with coffee and cigars. The food was familiar but the pacing was definitely marathon-style Mexican – any time I was flagging, I was fed. Everything was wonderful but what I most enjoyed was the pozole served toward the end of the night (maybe midnight I stopped counting) with corn kernels so plump and tender I thought they were shrimp.

I wish I could say I stayed to the very end but I fell short by about an hour. I really wanted to climb up to the El Cuauhcalli pyramid the next morning so I left a little early. An Aztec Temple of Eagle and Jaguar Warriors carved into the mountainside, some theorize it was part of a sun cult. Judging by the way the rays hit that rock at noon, I’d say they were right.  Climbing down the mountainside, we knew they’re were chilaquiles waiting, a post party cure, to take away all the pain before heading back to the city where we’d only gotten started.