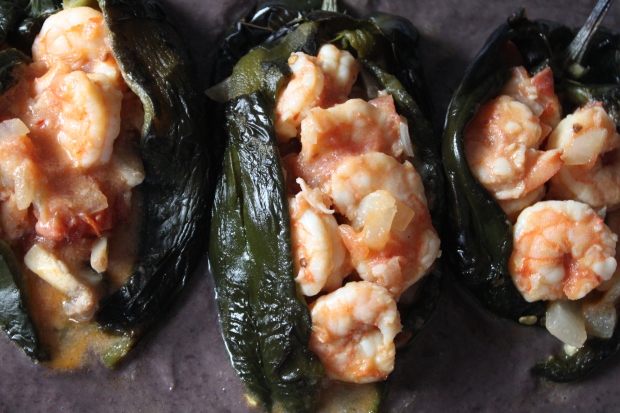 The weeks between Mardi Gras and Easter are defined by what you can’t do (or can’t do just yet) – light jackets but schizophrenic weather, longer days but dark morning commutes – a period of austerity before it’s all bunnies, baskets and tulips. While I’m far from orthodox, I do try to follow the no-meat on Friday rule during lent (though full confession I only seem to remember halfway through a turkey sandwich or mid-Korean barbecue).  With friends coming over, the timing was right for seafood.

In this week’s Devour the Blog, I talked about arriving in Mexico City and making camarones al chipotle with my Tia Cely. Having stopped off there first, I wanted to make my connection and continue to my original destination, picking up here where that post left off and trying a variation she’d suggested – roasted poblano peppers filled with chipotle shrimp and set over black bean puree.

Catching up from being away, my prep was a little off. The shrimp were straighforward but the I forgot to soak the beans overnight and had to use my pressure cooker (which thankfully did not explode). I also forgot my first batch of poblanos in the broiler and had to run out for more, so I was roasting and sweating the peppers until the last minute. Nevertheless, I loved the way it all came together. Far from bleak, the almost-spring colors from the deep purple beans and emerald green peppers to the peach-pink shrimp with the added heat from the chipotles pointed to the relief that was soon to come.

In a 4-6 quart pressure cooker, combine black beans, 6 cups of water, 1/2 of the chopped onion, a tablespoon of olive oil, and salt. Seal per manufacturer’s instructions. Set over medium heat and cook for 30 minutes. Remove pressure cooker from heat but do not remove lid. Allow the pressure to come down completely before opening.

While the beans are cooking, heat 1-2 tablespoons of olive oil in a heavy skillet over medium heat. Add the remaining onion and garlic and sauté for about 5 minutes until soft.

When ready to open, add the sofrito to the pot with black beans. Add herbs, vinegar, or a few more drops of olive oil to taste. Bring to a boil then lower to a simmer until completely tender, about 10-20 minutes. Adjust salt and pepper to taste. Using a food processor or blender, puree beans until smooth, adding broth from the beans as needed to reach desired consistency.  Set aside.

Make a slit in each pepper and pull out the seeds and veins. Fill with prepared shrimp. Pour half of the black been puree into serving dish and set stuffed peppers on the puree.  Serve remaining bean puree on the side.

Note: To roast the peppers, place them directly under the broiler in a baking dish, checking on them every couple of minutes and turning them until charred and puckered on every side.  Watch carefully to make sure that they do not burn through.  Once blackened evenly, they should be removed and sealed in a plastic bag for a few minutes to “sweat”.  When cool enough to handle, remove and peel off skin.