A few months ago a friend recommended Frida’s Fiestas: Recipes and Reminiscences of Life with Frida Kahlo.  Written by her step-daughter Guadalupe Rivera and Marie-Pierre Colle, it’s part cookbook and part food memoir.  Organized by month, each chapter centers on the holidays and seasons as they were celebrated in the Blue House in Coyoacán.  Describing a trip with Frida to the pyramids of San Juan Teotihuacán, the author writes:

After offering us the traditional refreshment of agua de chía, doña Rosa invited us to eat.  She had prepared a number of Lenten dishes typically served throughout the central Mexican plain, where the gods that Frida invoked in her paintings had once upon a time resided.  As it turned out, doña Rosa and don Tomas extended their hospitality to us for three more days, days in which reality was inseparable from magic.

It’s one of my favorite cookbooks to flip through so I decided to make something from it yesterday.  Enjoying the early thaw, my first instinct was to jump ahead to April until that description inspired me to give March a chance.  Though I usually see it as the month to be gotten through, there’s also something great about a long cross-fade – it’s all anticipation.  Running through the park this weekend, I was surrounded by the same bare trees but for the first time I could see what was coming.  Deciding to be honest to the time, I chose something from the March menu and was rewarded with plenty of green. 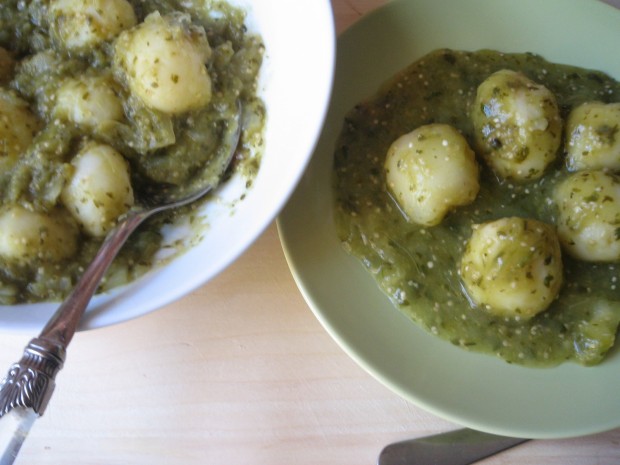 In a heavy pot, bring potatoes to a boil in salted water.  Simmer covered until just tender about 15 minutes.  Drain the potatoes.  Peel when cool enough to handle and set aside.

Add the tomatillos, garlic and half of the chopped onion to a heavy pot with enough salted water to cover.  Bring to a simmer over medium heat and cook until tender, about 10 minutes.  Drain the tomatillos reserving one cup of the cooking water.  Let cool slightly.

In a food processor or blender, combine the tomatillo mixture, chiles, and cilantro.  Puree until smooth adding water to reach desired consistency.  Do not over blend.

Melt lard in a heavy skillet over medium heat.  Add the remaining chopped onions and saute until translucent, about 5 minutes.  Add the tomatillo puree and cook until for 10 minutes.  Stir in the potatoes and continue to cook until completely tender and warmed through, about 15 minutes.

Frijoles Refritos/Refried Beans
To make the refried beans, I used the frijoles negros I had frozen but pinto beans are also popular.  Using the beans and their cooking liquid creates a deeper flavor but canned beans can also be substituted.

Melt lard in a heavy skillet over medium heat.  When it starts to smoke, add the chopped onions and saute until golden, about 5-8 minutes.  Add the cooked beans one cup at a time.  Mash the beans to form a puree as you stir them in with a potato masher or the back of a large spoon.  Season with salt to taste.  Raise the heat to medium-high and continue to stir until the puree pulls from the bottom and sides of the pan.  Adjust seasonings.  Serve on a platter and top with cheese and totopos. 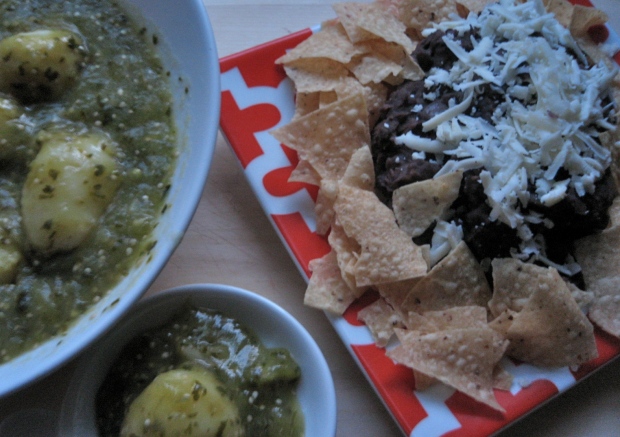