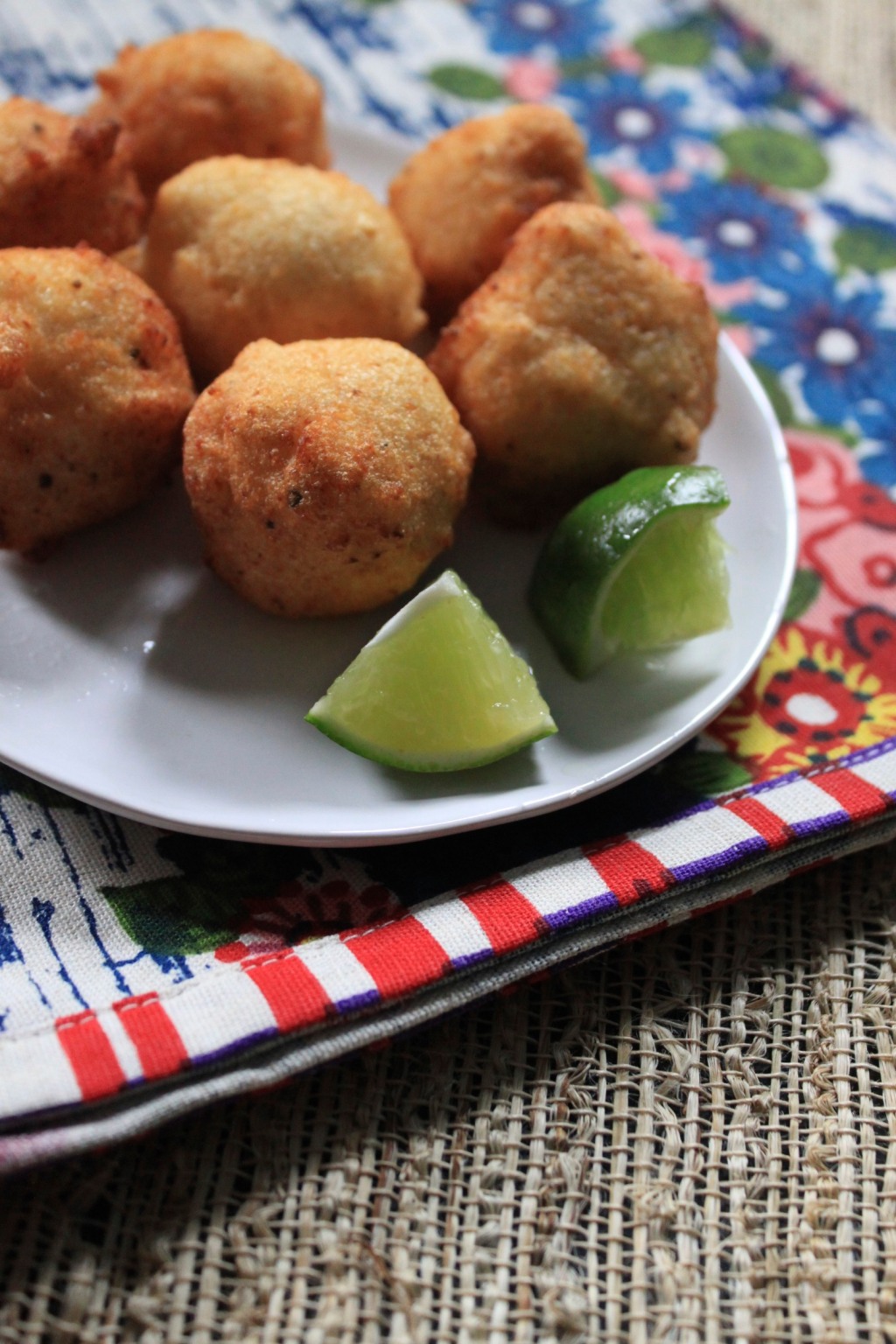 When I decided to make bollitos de carita – black-eyed pea fritters made from beans soaked for hours then husked and ground to a paste – I couldn’t believe no simmering would be required.  Left overnight, they were supposed to blister and pucker leaving behind perfectly tender, creamy white beans.  I loved that caritas roughly translates to “little faces” and imagined removing the peel would be as simple as slipping off a mask.  Not so.  Some popped right out but more needed coaxing, and no matter how many I did, there were always more. END_OF_DOCUMENT_TOKEN_TO_BE_REPLACED

We’d been expecting her for a long time but were still a little surprised when she finally showed up at our door – a little black peacock named La Filosofia. Months before, my sister Carmen and I were looking for a project we could develop together. I wanted it to be kitchen related since I live in there, and my sister thought of an apron with a laminated pattern just at the splash spot, where the torso meets the counter.  Practical yes, but when we found a collection of canvas in woodland prints, we knew they could be lovely to look at too. END_OF_DOCUMENT_TOKEN_TO_BE_REPLACED

The Elena Ruz sandwich always seemed a little out of place on the menu.  A combination of roasted turkey, cream cheese and strawberry preserves, it floats alongside the heavier ham, lechon asado and cheese melds of Cuban lunch menus – lighter and prettier with a first and last name.  Named for Elena Ruz, a Havana socialite who had the unusual combination made to order for her at El Carmelo.  Then a fashionable cafe in the 1930s, it landed on the menu becoming a popular item.  According to later interviews, her parents were scandalized to see a sign for “Sandwich Elena Ruz 25 centavos” on display, though as she pointed out the other sandwiches only went for 10 cents at the time. END_OF_DOCUMENT_TOKEN_TO_BE_REPLACED

When I asked my grandmother who’d taught her how to cook, her answer was always “el exilio”. Married in the 40’s and raising children in early 50’s Havana, she was very much a part of a generation that believed every modern convenience was invented to limit their time in the kitchen – a movement that if she hadn’t followed, she would have invented. Then like many women emigrating to Miami and starting over in a new country with less help and fewer resources to feed their families, the one guide they all shared was Nitza Villapol’s Cocina Criolla.

Known as the Cuban Julia Child (if those two things aren’t in fact mutually exclusive), her book became the center of every cuban kitchen in exile, providing a way for them to see their family’s through a difficult transition and begin recreating what they’d left behind. A controversial figure, whenever I have a basic question about Cuban cooking the first suggestion is always to check el libro de Nitza. Reading through it now, I find all kinds of idiosyncrasies. Cubans are unrepentant Francophiles so while they’re french terms sprinkled throughout, there’s an entire section that puts “pie” in quotes and names ingredients by their American brand names. Only available in a slight, paperback edition that looks dog-eared even when it’s new, it’s a popular gift even now for Cuban women who are either getting married or leaving home, whichever comes first. My own copy found me when I was helping to pack my grandmother’s belongings after she’d passed. I was shocked. First, that she owned a cookbook and second that it had clearly been used. END_OF_DOCUMENT_TOKEN_TO_BE_REPLACED

I thought this article about food in Cuba from the Atlantic Monthly online was pretty accurate.  When I visited Havana in 2000, any food I had outside my family’s home tasted like ashes, and the service was indifferent when not insulting.  Inside, however, my great aunts were able to work miracles with the little food we’d brought, together with the fresh vegetables that had come in earlier that week from the countryside and sold house to house for dollars.   I remember a big part of each morning involved picking the stones from the rice.  There were also tiny stones in the queso guajiro we ate every night with bread and Menier chocolate from Miami.  Stones in rice inedible, stones in cheese dipped in chocolate, oddly fantastic.