First Look Inside The Cuban Table 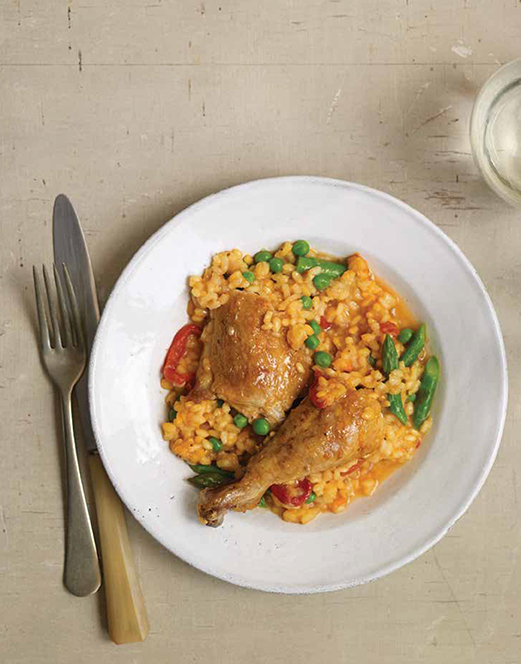 The Cuban Table  will be here next week but I couldn’t wait until then to share a recipe from the book.  I’d been planning on this post for awhile but it was hard to choose just one.  Not only are they all attached to a memory or favorite moment during this long process, they’re also attached to some of my favorite people.  They were great company as I wrote and I’m so excited to introduce them to you.  Even now, I feel like when I open the cover they all start talking once – a familiar feeling if you’ve ever walked into a Cuban gathering.  It’s also at those parties where you’ll most often find … Arroz Con Pollo.  And that’s how I finally decided.

Whether it’s a shower, baptism, birthday, or just Sunday,  arroz con pollo – chicken marinated in sour orange juice then added to a sofrito simmered with rice until it all turns bright gold – is a dish that’s all about family.  Almost everyone I spoke to for the book had a version they were willing to share, but my favorite was given to me by Carmen Calzada.  Working from the kind of perfectly organized and gadget-filled kitchen I hope to have when I grow up, Carmencita pulled up recipes from the neatly labeled binders she keeps on a pantry shelf.  She inherited this particular one from her mother-in-law but over the years she’s added her own meticulous notes, including how to stretch the recipe to fit the occasion – whether it’s for 10 or 20.  While we worked, her husband, the painter Humberto Calzada, provided the entertainment and a steady supply of daiquiris.  My research started in their blue tinged and book lined living room just off of Humberto’s studio and for over two years they were my first call when I needed to better understand a long forgotten technique (Carmencita), find Miami’s best menesiers and pastelitos (Humberto), or throw together a very last minute dinner party when all other locations fell through (Humberto but with Carmencita’s permission).  I couldn’t think of a better introduction to the Cuban Table.

Arroz con Pollo
In the 1950s, when poultry was more expensive than either fish or beef, Arroz con Pollo was the preferred dish for special occasions and Sunday family gatherings. It’s a one-pot meal that’s still perfect for feeding a crowd. Carmen Calzada shared her family’s recipe with me.

Preheat the oven to 325°F.
Heat the olive oil over medium-high heat in an ovenproof, 6-quart heavy pot or
Dutch oven until hot but not smoking. Add the green pepper to the oil. Working in batches, brown the chicken on both sides, 2 to 3 minutes per side. Set aside the browned chicken and repeat with remaining pieces. Remove the green pepper and discard.

To deglaze the pot, add the wine and bring to a simmer, scraping up the browned bits. Return the browned chicken to the pot. Add the remaining ingredients except for the rice, and half the beer and part of the pimientos to add at the end. Bring to a simmer.
Stir in the rice and simmer over medium-high heat for 10 minutes. Remove the pot from direct heat, cover with a tight-fitting lid, and set in the preheated oven, and bake until the rice is tender but still moist, about 20 minutes.

Remove from the oven and immediately pour in the remaining beer. Garnish with the reserved pimientos.