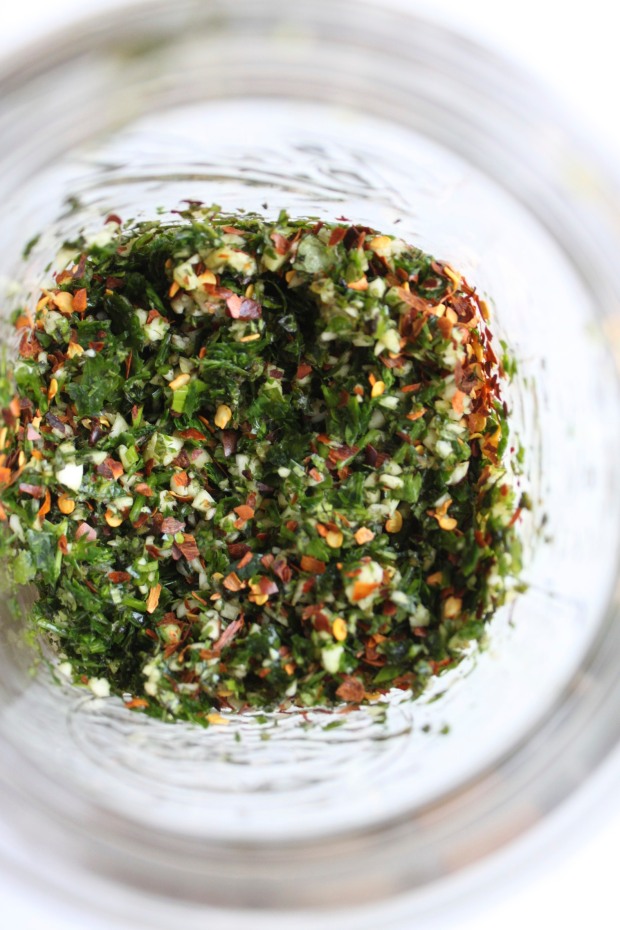 I’ve never been one for meat and potatoes. I rarely go for the steak frites on frenchified Smith Street and I’m as interested in the sides as the slabs of beef served at steakhouses. While I believe hamburger cravings should always be heeded because absolutely nothing else will satisfy, my own burger attacks are few and far between. Still there are exceptions when I really do love red meat: 1) when my mother who is a genius with a Costco steak and open flame grills for us at home (post to come later) and 2) Argentinian-style churrasco drizzled with chimichurri sauce.

The version of chimichurri I come back to again and again comes from Argentinian chef Francis Mallmann. For weeks, I’ve had his Seven Fires on hand which keeps me daydreaming about enormous asados over raging fires on the South American plains. The light touch in Seven Fires  belies Argentinian cuisine’s heavy reputation. I always flip through the book when I need to take something to a friends house – which in the summer usually means grilling over borrowed fire.  I’ve made the zucchini salad with basil and mint a couple of times already and am trying his burnt orange slices with rosemary soon.

Mallmann’s chimichurri recipe, listed with the basics in the back, is possibly my favorite entry. Especially when he gets heated up about the overly complicated “chimichurri” variations that bear little resemblance to the parsley, oregano, garlic, olive oil, and vinegar blend credited to South America’s spartan guachos. Perhaps because the word chimichurri’s origin is unknown, people feel free to slap it on any sauce or marinade that pairs well with beef.  The only convincing theory I came across comes from Nelida Bernal (via Steven Raichlen) who links it to the Basque word “tximitxurri” which loosely translates to a mixture of things in not particular order. Mallmann gives a very precise why to bring all the ingredients, however, and his only major adjustment is replacing the traditional dried parsley and oregano with fresh herbs – inspiring me to get the most out of my favorite Brooklyn summer markets, which aren’t the pampas but will have to do for now.

Chimichurri
This recipe comes from Seven Fires: Grilling the Argentine Way by Francis Mallmann and Peter Kamisnky. Though it’s best made the day ahead, I’ve never been able to wait too long and keep a jar of it on hand.

Prepare the salumera. Place the water in a small saucepan and bring to a boil. Add the salt and stir until it dissolves. Remove from heat and set aside to cool.

Mince the garlic and place in large mason jar. Mince the parsley and oregano and add to the garlic. Stir in the red pepper flakes to taste. Whisk in the red wine vinegar followed by the olive oil. Whisk in the salumera until well blended. Close the lid on the mason jar and store in the refrigerator.

The chimichurri is best prepared at least 1 day in advance and will keep well up to 3 weeks.