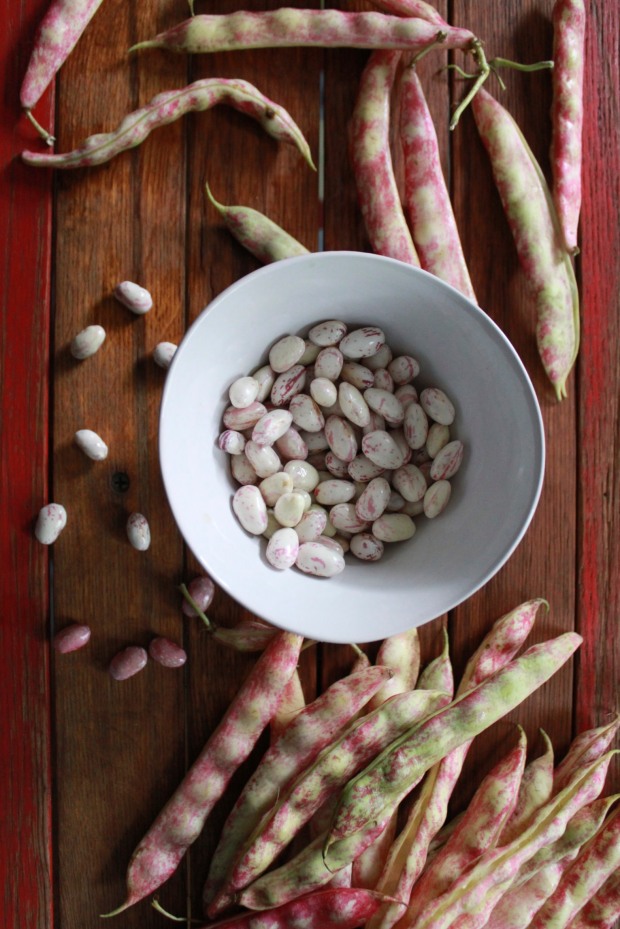 I always hope that someone will see a recipe on my site and decide to try it out for themselves.  In the case of these porotos granados, I absolutely understand if they wait for the cooler days of summer.  I came across the Chilean recipe months ago when fresh cranberry beans seemed very far away.  With origins going back to the pre-Columbian Mapuche Indians, it brings together my summer favorites- fresh beans, tomatoes, and corn.  Available year around as dry Roman beans, I could have made the dish with frozen corn, and canned tomatoes but decided to wait.  Finally, last week the cranberry beans made their appearance at my Sunday farmer’s market, right around the time someone turned the heat up to a 100 degrees.

Raised in sweltering Miami on frijoles negros and potaje de garbanzos, I decided to make them anyway.  After a few minutes at the simmer, their candy-colored stripes would go mauve so I took my time with the pictures while I was shelling them.  I also prepped everything before starting, so I wouldn’t have to spend more time near the stove than was required.  Comparing recipes, I noticed some grounded the corn before adding it or cooked the calabaza until it was completely melted into the stew.  I wanted to retain some of the texture of the vegetables so I left some pieces of calabaza whole and threw in the pre-cooked beans and corn at the last possible moment. 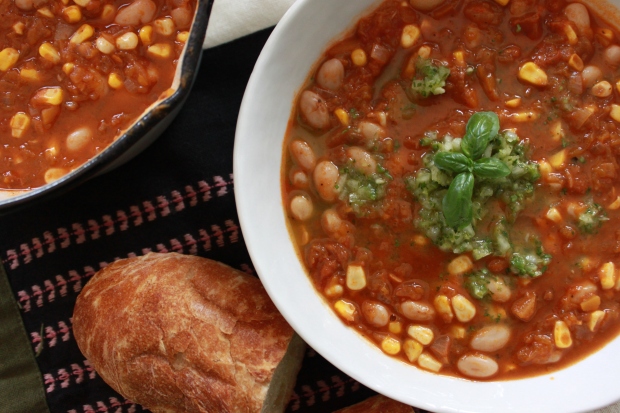 With the stew simmering, I turned my attention to the pebre, a traditional garnish with fresh herbs like cilantro and parsley and a small amount of heat from Chilean green peppers (I substituted jalapeños).  Once I combined the ingredients, it had only to sit while the flavors developed.  By the time it was done, the heat had broken just enough for me enjoy adding a bit of my own.

Porotos Granados/Cranberry Beans with Corn and Squash
Both recipes are adapted from The Book of Latin American Cooking by Elisabeth Lambert Ortiz. There are many versions of porotos granados to choose from. I mashed the garlic with the dried herbs to make a more traditional sofrito before adding the tomatoes. I never liked cumin very much, but since I started using the seeds, smashing them as I go, I’ve been dropping it into everything.

Garnish with pebre to taste (see below)

Rinse the fresh beans and put them in a saucepan with cold water to cover (about 3 cups). Bring to a boil than lower the heat, and simmer, covered until the beans are tender, about 45 minutes. Drain the beans and reserve the cooking liquid.

In the meantime, mash the garlic, oregano, cumin seeds, salt, and pepper in a mortar and pestle or small bowl to form a smooth paste.

Heat the oil a skillet and stir in the paprika over medium heat.  As soon as the paprika and oil are thoroughly mixed, stir in the onions and sauté until tender, about 5 minutes. Add the garlic mixture and tomatoes and simmer, stirring occasionally until it is thick and well blended, about 5 more minutes. Combine the squash, cooked beans in a large saucepan with just enough cooking liquid to cover. Bring to a gentle simmer and cook covered. The calabaza will disintegrate and thicken the sauce. Stir in the corn and simmer an additional 5 minutes. Adjust seasoning. Serve in soup plates with pebre, chopped basil, or merken to taste.

*I didn’t want to blanch the tomatoes to remove the skins so instead I used a trick a friend taught me where you slice off either end of the tomato, and with a small serrated knife, you peel it like a pineapple working top to bottom.

Combine the first five ingredients in a bowl.*  Seperately, whisk together the lemon juice and olive oil until well combined then add to the onion and herb mixture.  Let stand for an hour before serving.

Note: For a finer texture, combine the first five ingredients in a food processor.  Pulse only a few seconds at a time to finely chop.  Proceed as directed.