I know it shouldn’t make a difference but I love it when food has a story and Chilean olive oil has been writing its own. Alfonso Swett who discovered small scale olive oil plantations in conditions similar to the Chilean climate on a trip through Spain, wondered why it shouldn’t be cultivated and produced in Chile as well.  Olisur, an estate grown, largely sustainable operation encompassing a 6,500 acre olive groves and expecting to produce 1.7 million liters of olive oil in their next harvest, grew from this initial why not.

Established in the Colchagua Valley, between the Andes and Pacific, the olives are gently shaken from the trees with the same machine used to harvest grapes in the surrounding vineyards (though I like to imagine the work done by a crack team of gentle giants). The olives are pressed within four hours of harvesting – by-products are repurposed as organic fertilizer and even the pits are used to fuel the generator. The company launched its O-LIVE & Co and award winning Santiago lines in the US last year. Not limited to a single producer, Jim Leahy of Sullivan Street Bakery has also started to market Chilean olive oil under his own label.

A few months ago, I received some bottles of Olisur and planned on doing a well considered tasting and comparison to the Spanish olive oil I keep on hand. Unfortunately, I found myself short one night mid-recipe so I cracked open the first bottle without any ceremony, telling myself there was plenty left to do a real tasting later. Since then I’ve used it for vinaigrettes, sofritos, sauces, stews, beans and fish. No tastings but lots of flavor – grassy, peppery, green. Having drained the first bottle to the last drop, the remaining two were in danger. There’s nothing better than a night of picadera so I planned on putting together a grazing menu for some friends for long weekend catch-up, serving the olive oil on it’s own with just some bread for dipping. 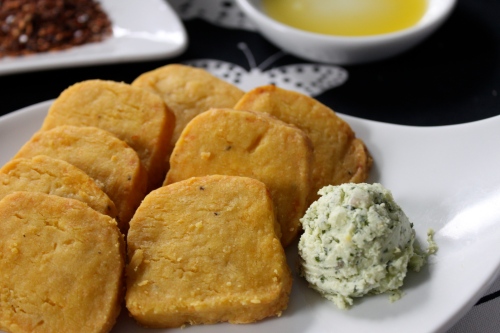 For the rest, I was going to round up the usual Mediterranean suspects – manchego, membrillo, prosciutto – but decided to go south instead – all the way south. I knew we’d probably skip dinner so I made sweet and savory pork empanadas from Chilean viticultarist Valeria Huneeus and galleticas de aji amarillo topped with a feta cilantro dip. Curious about other Chilean products, I made my way down to Soho’s Puro Chile and found tinned king crab ready for dressing and almonds dusted with merkén, a Mapuchen spice made from cacho de cabra (goat’s horn) peppers and blended with coriander and cumin.  Similar to a smoky pimentón, it’s been making its way into everything since.

Of course I had to include wine and stopped by Puro Wine. The Carménère they recommended had its own story. Originally from the Medoc region of Bordeaux, cuttings were brought to Chile in the mid-19th century shortly before a plague of phylloxera made the grape all but extinct in France. The vines thrived in Chile but in disguise. For over a hundred years, they were confused with Merlot, giving Chilean Merlot its distinct quality but robbing the Carménère of its own identity. Rediscovered in the 1990’s, an in depth study confirmed that it was actually “the lost grape of Bordeaux,” thriving in the same Colchagua Valley where the olive groves took root, because no one told it not to.

In an electric mixer fitten with the paddle attachment, beat the butter at medium-high speed until it is pale and fluffy, about 2-3 minutes. Blend in the  ají amarillo paste and continue to beat until just combined, occasionally scraping down the sides, about 1-2 minutes. Combine flour, parmesan, salt and pepper. Using a wooden spoon or spatula, stir in the flour mixture for a couple of turns. Return to stand and mix on low speed until flour is just incorporated. Pour onto a piece of plastic wrap and shape into a log. Chill until firm at least 1 hour or overnight.

Preheat the oven to 350 degrees with the rack in the middle. Line a baking sheet non-stick liner or parchment paper.

Cut the log crosswise into ¼” slices placing them on the prepared baking sheet about ½” apart. Place in the oven and bake until golden, about 20 minutes. Cool on sheet for 5 minutes then transfer to rack.