I’ve spent the last couple of weeks under water.  Not that I’ve been unusually busy, I’ve just returned to my aqua girl routines in hopes of washing away the holiday excess – drinking water like it’s my job, swimming laps like I’m being chased by a shark, and looking to add more fish to my weekly diet.  Cooking fish has always made me nervous.  At best, I worry that I’ll let it go too long and over cook it, at worst, that I’ll poison everyone I love in one fell swoop.  I usually stick to the sushi grade varieties in the belief that if I’d just as soon eat it raw, there isn’t anything I can do to make it deadly.  Still, no one likes a rut and the guys at the fish store automatically move towards the salmon before I’ve even placed my order.  Sometimes I’ll change it to tuna or trout just to keep them guessing but I’m pretty sure it’s daring only to me.  After a few weeks of seeing pargo (snapper) on every Cuban restaurant menu in Miami, I thought it was time switch things up again. 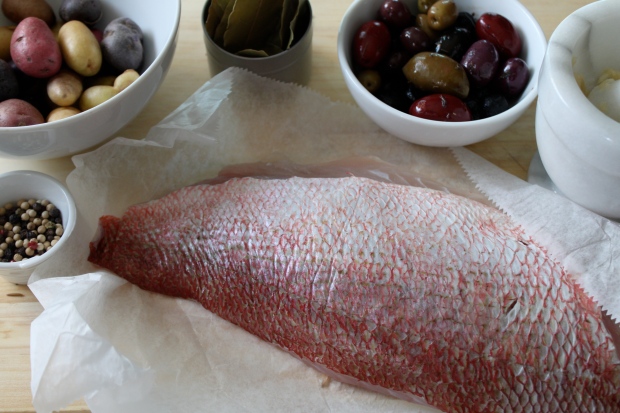 I decided to call my fishing cousins.  Visiting their house with my grandparents, it seemed they were always either out on the boat, back from the boat, or getting ready to take the boat out again.  Their house was itself a kind of aquarium filled with birdcages and plants too green to be believed, so that you couldn’t tell if you were outside or in.  Eventually, the boat won and my aunt and uncle retired to Key West (of course).  All those years of fishing couldn’t have gone to waste and so I asked my aunt for some suggestions.

I asked her about pescado en salsa verde but after reading off the directions, she mentioned a different recipe that had been in my family over a hundred years, since their time in Yaguajay.  The snapper is seasoned then marinated in tomato sauce, olive oil, vino seco and cider and covered in onions and bay leaves, potatoes are added just before cooking.  Originally, the recipe called for the fish to be placed over hot coals but it had been introduced to the oven in the last sixty or so years without a problem.  The only difficulty I had was finding out too late that the fillets should be skinned.  Easy enough to request when I bought the fish, I realized I had a terrible knife and worse skills.  Now pressed for time, my aunt talked me through it, but I don’t know who suffered more, me or the fish.

My ordeal over. I threw in a variety of purple and red potatoes I’d found for color with whatever olive mix looked prettiest.  While it was baking, I made a quick batch of white rice with garlic oil to accompany it and toasted some bread.  I admit that I made a few more calls to my aunt to make sure I had everything right, borrowing a little of the cooking confidence I don’t always feel. 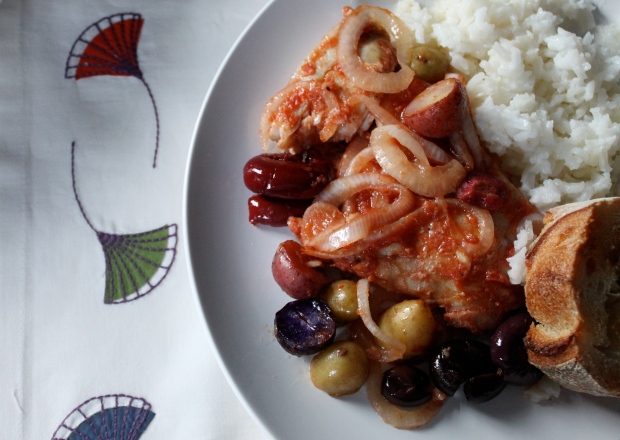 Pargo con Tomate, Cebolla y Papas/Snapper with Tomato, Onions and Potatoes
The fish can be marinated in the morning in the tomato mixture and baked at night.  An simple addition to my usual rotation.  I chose small peanut fingerling potatoes because they could be parboiled quickly before adding to the pan.  Next time I will use Kalamata olives but chose a variety of mixed olives marinated in rosemary just to try (and again for color).  For a thicker sauce, the fish can be removed after cooking and the sauce can be heated until slightly reduced, but I preferred to keep it thin and soak it up with the bread.

Using the side of a large knife or mortar and pestle, mash the garlic to a paste with salt and pepper.  Rub the garlic paste over the fillet on both sides and arrange them in a large glass or ceramic baking pan.

Combine the tomato puree, olive oil, vino seco and vinegar and mix until well blended.  Cover the fillets with the tomato mixture, turning them once to cover both sides.  Spread the bay leaves and onions over the fillets and cover the pan with plastic wrap.  Refrigerate until ready to use, at least two hours.

Place potatoes in a medium saucepan with enough cold water to cover and 1 tablespoon of salt.  Bring to a simmer and cook until almost tender, about 5 minutes.  Drain potatoes well.  Add potatoes and crushed olives to the pan.  Place in the preheated oven and bake until cooked through, about 35-40 minutes.  The fish should flake easily when tested with a fork in the thickest part.

Remove from oven and serve with rice and crusty bread.