Arroz con coco rates high on the long list of things I should have tried sooner.  A staple of Caribbean cooking, especially along the coast of Colombia, it’s essentially white rice cooked with coconut milk then served with fried fish, plantains, avocado.  Deceptively simple, I used equal parts canned light coconut milk and water for the first attempt, combining all the ingredients and bringing them to a fast boil.  The result was great if I was going for rice pudding but otherwise too sticky and un-fluffable.  Trying to get the proportions and the timing right, I used a second can and sautéed the rice with a little bit of oil before adding the liquid.  It may have worked but I let it go too long and the amount of rice was way off, so it burned before it cooked. 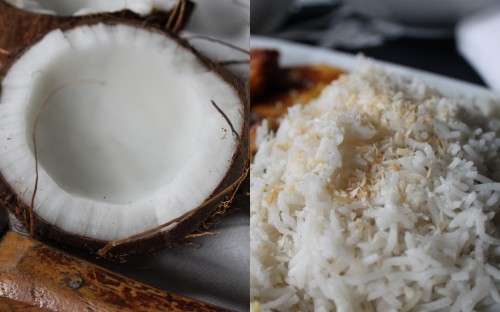 For my third and final try, I was out of cans but in the specialty shop geography of gentrified Brooklyn, organic dried coconuts were more accessible than canned coconut milk.  I had also come across heated debates about the superiority of freshly expressed coconut milk.  Deciding it was worth a little extra work, I got out the hammer to chop and grate coconuts for a few cups of milk. Taking no chances this time, I brought the fresh coconut milk and water to a simmer then added the rice and left it at the lowest possible setting, checking it often.  After a 15 minutes the tell tale holes appeared on the surface.  Subtle and deep, the coconut flavor infused the rice without weighing it down.

Needing some fish to justify the side, I considered a pan-Asian curry–almond blend but my friend Catalina pared it down for me instead – trucha frita and patacones.  I didn’t want the trout battered and deep fried so I followed another friend’s suggestion to just drizzle it with olive oil, salt and pepper then add it to a hot pan until it was crisp on both side and just cooked through, saving the frying for the patacones  (aka tosotones).  A sun and seawater meal just when I needed a few extra minutes of light at the end of the day.

Arroz con Coco/Coconut Rice
It can also be made with just with coconut milk or titoté, coconut milk that’s been boiled down and caramelized, toasted coconut and raisins are optional.

Bring coconut milk, water, sugar and salt to a boil.  Immediately add rice and return to a high simmer.  Partially cover and lower heat to medium low until water is absorbed and rice is tender, 15-20 minutes.  Remove from heat and let stand covered, about 5 minutes.*  Fluff with  a fork.

Serve with fried fish and patacones.

Note:  If using, add the raisins to the rice here.