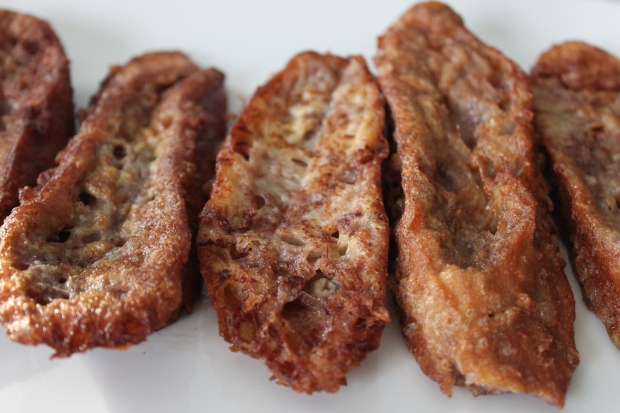 Its taken me a few days to emerge from my runner’s fog, but I finally found my way to the kitchen and decided to start with torrijas al vino.  Served for breakfast, dessert or as a snack, the bread is soaked in milk or wine, dipped in eggs, then fried and sprinkled with cinnamon and sugar or soaked in spiced syrup.  I’ve wanted to make torrijas since I was in Spain where they’re popular during Easter and at Christmas almost everywhere else.  Commonly known as torrejas throughout Latin America, I was only familiar with the Cuban version which is typically much sweeter, incorporating only a small amount of vino seco.  Though similar to the French pain perdu, the Spanish version may have preceded it, with the first mentions of it dating back to the 15th century. 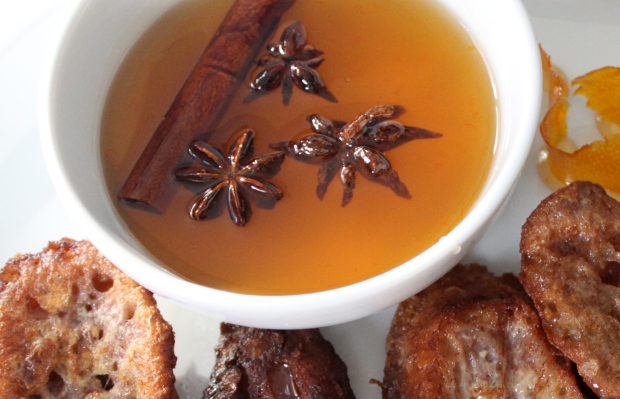 With so many variations, I wasn’t sure which way to go.  Most recipes called for equal parts milk and wine or even just red wine.  My sweet side won out so I soaked the bread with milk boiled with a little sugar and cinnamon before drizzling it with wine.  While the bread soaked, I thought they would never hold together for the final egg dip but they did.  Lightly fried, they crisped up quickly while remaining moist throughout, taking up the orange-anise syrup without becoming soggy or overly sweet.  I was happy I’d chosen a good Italian wine that I’d been saving.  At first, pouring it over bread to be fried seemed wasteful but for once I didn’t care.  I love eating wine and being back in the kitchen and finally making torrijas became it’s own special occasion. 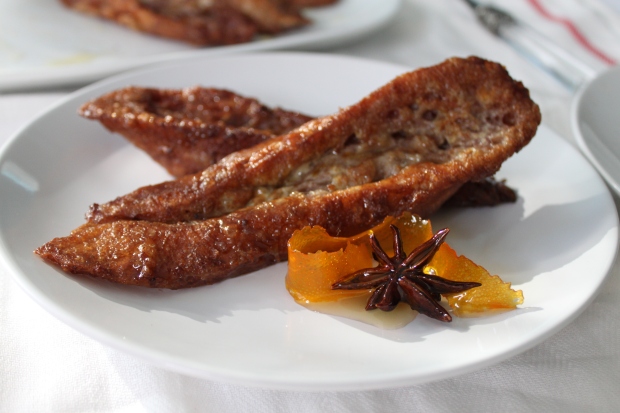 Torrijas al Vino
Apart from the milk to wine ratio, I also debated between deep frying in a flavorless oil like canola or lightly frying them in olive oil.  I tried both and preferred the flavor that the olive oil added, keeping the savory and sweet in balance.

Place slices of bread in a deep dish or glass baking pan.

Combine the milk, sugar, orange peel, and cinnamon stick in a small saucepan.  Heat over medium heat until it just begins to boil.  Remove from heat and allow to cool slightly.  Pour over the slices of bread.  Pour red wine over the bread, turning the slices over so they soak up as much liquid as possible.

Add the oil to a large heavy skillet, about 2-3″ deep.  Heat over medium-high heat to 365 degrees.

Using a slotted spoon or spatula, lift the bread slices of the milk and wine mixture and dip into the beaten eggs, coating evenly.

Carefully, add the bread to the hot oil and turn until brown on both sides, about 2 minutes.  Remove and drain on paper towels or cooling rack.

To make the syrup, combine all ingredients except for vanilla in a heavy saucepan and bring to a boil.  Cook until it reaches the thread stage (230° F).  Remove from heat and add vanilla while still warm.

The syrup can be poured over the torrijas before serving or on the side, warm or at room temperature.