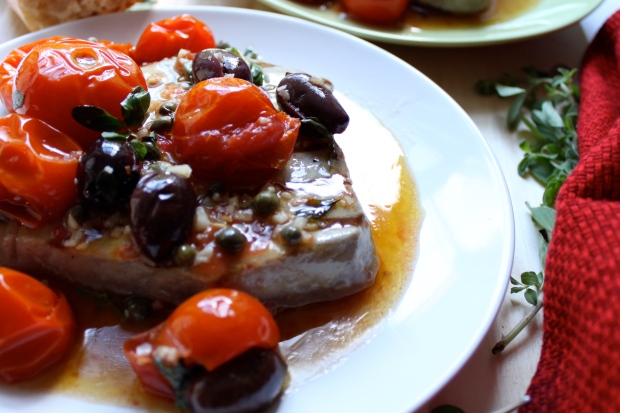 I wish I had the ability to just stroll over to the farmer’s market, grab a couple of beets, some Swiss chard, and an apricot and turn it into a feast by finding inspiration in the season laid out under tents and weighing down tables.  But that would mean giving up the planning, the list, and the check off which I also love, especially the list. 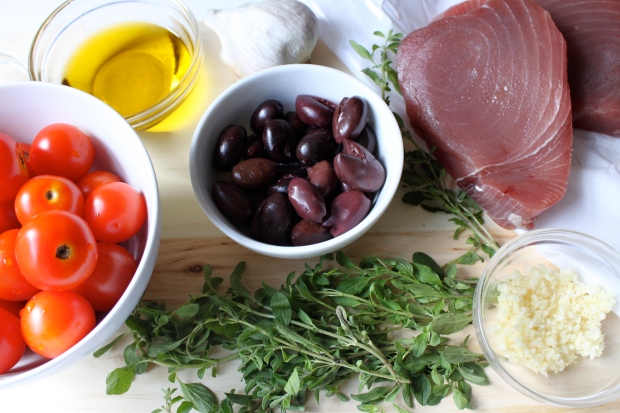 While I do try to embrace the seasons, I prefer to experience them bound between two covers, divided into chapters, and with an index.  That’s why I was so excited try a recipe José Pizarro’s Seasonal Spanish Food.  A collection of recipes divided into Spring, Summer, Fall and Winter, he takes the ingredients as they come, as he remembers them form his childhood in Extramadura, and as they’re prepared in his London restaurant, Tapas Brindisa. 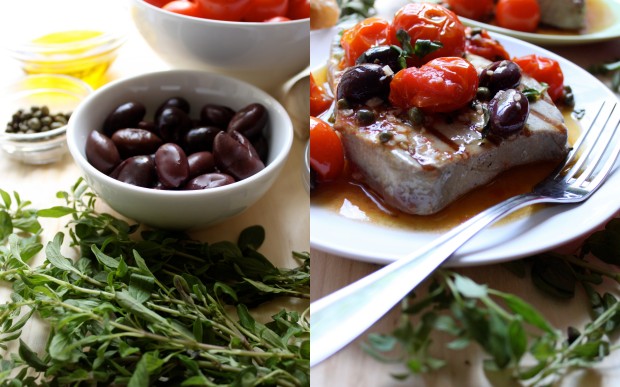 I was tempted to turn back the clock just a little and start with Spring, but the asparagus, peas, and artichokes while still plentiful were not as bright-eyed, so I decided to try a grilled tuna steak with roasted tomatoes instead.  A straightforward recipe with few ingredients, by the time I came home from the market and unpacked my bags, I was halfway done.  There was a little chopping, minimal stirring, and some heat.  It didn’t needs sides or salads, just good olive oil, collapsing tomatoes, and a baguette to soak it all up.  Rather than connect me to my seasonal surroundings it took me back to my time in Spain where it’s just about finding good ingredients at their best and having the sense (or someone else’s sense) to stay out of their way. 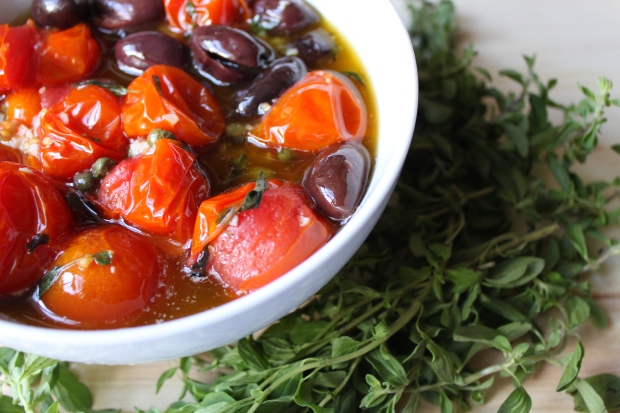 In a large mixing bowl, combine the cherry tomatoes, garlic, 5 tablespoons of oil, and oregano (or marjoram) before pouring everything onto a baking sheet.  Roast for about 20-25 minutes, until the tomatoes look as though they are about to collapse and their skins are crinkled.  Remove from the oven and set aside to cool.

Once they’ve cooled, transfer tomatoes and juices to a salad bowl then stir in the capers and olives.

Heat a ridged skillet or cast-iron frying pan over medium-high heat until hot then add the remaining tablespoon of oil.*  Season the tuna steaks with salt and pepper and add them to pan, careful not to overcrowd them.  Grill the tuna to desired degree of doneness, 1-2 minutes on each side for medium-rare.  Place steaks on plates and top with tomatoes on top and side.  Serve immediately.

*The tuna steaks can also be grilled on an outdoor grill.