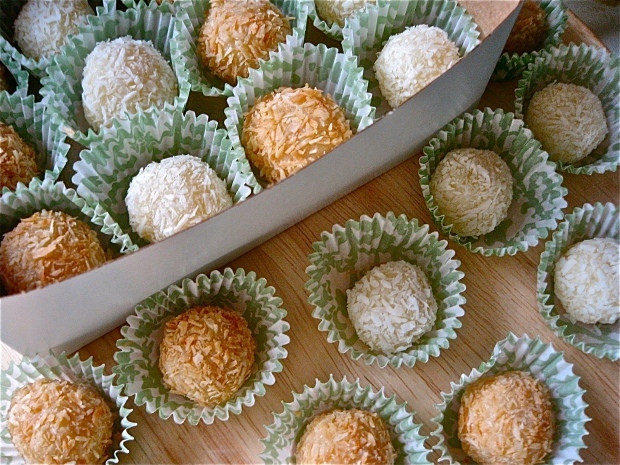 I’d been burned before.  Last summer I found an old recipe for Brazilian coconut candies called  brasileiras.  I put all the ingredients together as directed – egg yolks, freshly shredded coconut, sugar – but they wanted nothing to do with each other.  I Googled “brasilerias” to find my mistake but the results were (not surprisingly) unhelpful.  A few weeks later, I attempted beijinhos de coco or “coconut kisses”. Similar to the brasileiras, they’re a combination of condensed milk, butter, and grated coconut that are rolled into balls and decorated with a single clove.  This version called for a final dip in chocolate and almonds.  I should have known when I wasn’t able to form the coconut into balls, mounds or anything like it that I’d made a mistake somewhere.  I kept going anyway, making an expensive chocolate almond mess.  I pretended they were edible, but after a day or two, I stopped kidding myself and threw the rest away.  I hadn’t looked a coconut in the eyes since.

That’s where I was yesterday when I read Julia Moskin’s New York Time’s article, “Milk in a Can Goes Glam“, that included this recipe for coconut brigadeiros by Leticia Moreinos Schwartz.  I needed something to bring to a friend’s house and these would be perfect (if it worked).  As Leticia explains:

“Brigadeiros are like the cupcakes of Brazil,” Ms. Moreinos Schwartz said. “They are at every birthday party.” (They are named for a once-popular politician, Brigadier Eduardo Gomes, who ran for president in 1945 under the slogan “Vote no brigadeiro, que é bonito e é solteiro” — “Vote for the brigadier, who’s good-looking and single.”)

Traditionally, brigadeiros have added cocoa powder and the fudge is then rolled in chocolate sprinkles.  The coconut version is similar to beijinhos, but I didn’t mind switching the chocolate to coconut as long as they had a new name (with a flirty origin) to make a fresh start.

Brigadeiros de Côco/Coconut Brigadeiros
Barely adapted from Leticia Moreinos Schwartz, The Brazilian Kitchen.  The recipe is straightforward, but I made sure I had a spare can of condensed milk in case I need to start over.  It called for corn syrup, which I usually avoid, but wasn’t taking any chances.  When my first batch produced the blob as promised, I decided to use my spare ingredients to switch out the corn syrup for honey.  Darker and sweeter, I decided to roll them in toasted coconut.

In a medium-size heavy saucepan, combine condensed milk, coconut milk, butter, corn syrup, and 1/2 cup shredded coconut. Bring to a boil over medium heat. Reduce heat to medium-low and whisk constantly until fudgy and whisk leaves trails in the mixture, 8 to 10 minutes. When mixture is ready, it will pull together into one soft piece, leaving browned residue on bottom of pan.

Slide mixture into a bowl. (Don’t scrape the pan; leave any residue behind.) Let cool to room temperature, then refrigerate until very firm, 3-4 hours.

Place remaining 1 cup of coconut in a wide bowl.  Scoop out a teaspoon of batter and roll into a ball.  Drop into the coconut as you finish rolling it.  Roll 4 to 6 brigadeiros at a time through coconut, covering surface completely. Lift out and shake off the excess.  Store in an airtight container at room temperature for 2 days, or refrigerate for up to 1 month. Serve at room temperature.

Note: If you’d like to toast coconut for rolling.  Preheat the oven to 350 degrees.  Spread remaining coconut on a baking sheet checking often and stirring regularly, about 4-5 minutes.