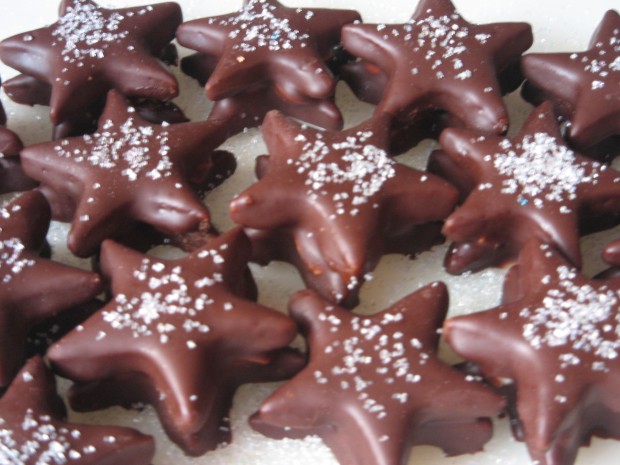 I’ve become deeply suspicious of Cuban cookies.  It’s not really the cookie’s fault.  They’re just not what we do.  Growing up, home baked cookies weren’t foreign but they did have the exoticism of something you’d mostly like get at a friend’s house.  Tres leches, meringues, tocino del cielo, flan were home, toll house was not.  The last couple of months, I’ve tried a few forgettable variations. I follow the recipes to the letter but cusubes elude me and my caballitos de queque were cinnamon drenched failures.  This being the cookie season, I looked though all my Cuban sources for a new recipe that was traditional but workable.  Many called for Crisco with 1950’s abandon while others were really turrones (blended with more Crisco).

Finally, I found estrellas de chocolate.  Star-shaped chocolate sandwich cookies with peppermint cream cheese filling dipped in melted chocolate and rolled in coconut, it sounded like an Oreo having a nervous breakdown.  I had to try it.  Refusing to go down with a bad recipe a third time, I decided to approach each part separately and see what worked.

I used my favorite chocolate wafer recipe and replaced the butter in the heavy chocolate coating with grapeseed oil for a lighter finish.  The cream cheese and peppermint filling worked really well but I left off the shredded coconut.  In the end, they were pretty but plain so I added a little sanding sugar.  I had taken away so many of their frills that I wanted to give them back a little sparkle so they still felt like themselves. 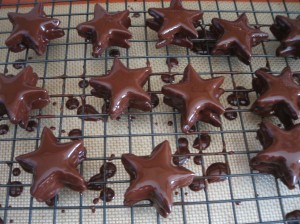 Estrellas de Chocolate/ Chocolate Stars
I came across the idea in Nitza Villapol’s Cocina al Minuto but the recipe is largely adapted from Gourmet, December 2007.  Getting it all down, I realized that it seemed like a lot of steps but it actually goes very smoothly since the filling and coating can be done quickly while the dough is chilling.

Make dough:
In a mixing bowl, sift together flour, cocoa powder, baking powder and salt then set aside.

In an electric mixer fitted with a paddle attachment, beat butter on medium speed till creamy about one minute.  Slowly add sugar and continue to beat on medium high until light and fluffy, about 5 additional minutes.

Add flour mixture all at once and stir with a spoon or spatula for a couple of turns.  Return to stand and beat on low speed until just combined.  Divide dough in half and form into discs.  Cover with plastic wrap and refrigerate till firm, at least 3 hours (dough can be chilled up to 2 days).

Between two sheets of parchment or wax paper, roll out dough to a 1/8″ thick.  Refrigerate or freeze until firm again, about 10 minutes.  Repeat with the second disc.

Using a star cutter (or other desired shape), cut out as many stars as possible from first chilled square.  Immediately transfer cookies to prepared sheet, arranging them 1/2 inch apart.  (If dough becomes to soft, return to freezer until firm.)

Bake until baked through and slightly puffed, 10 to 12 minutes.  Cool on sheet on rack for 5 minutes then transfer to rack.  Repeat with remaining dough.

Beat the cream cheese until smooth.  Slowly beat in confectioner’s sugar until light and fluffy.  Blend in peppermint extract.  Using a pastry bag, pipe filling onto flat side of cookie and top with second cookie.  Chill until filling is set, about 15 minutes.

Place chocolate in a double boiler or heatproof bowl over simmering water and stir until melted.  Off heat, slowly add grapeseed oil until completely blended.

Place cooling rack over a baking sheet lined with silpat or parchment paper.  Balance each filled cookie on a fork over bowl and cover with chocolate until completely coated.  Place on rack and repeat.  Freeze cookies till coating set, at least 15 minutes.