With the holidays coming fast and furious, I had the uncharacteristically practical thought that it was time to make empanadas, an easy way to use leftovers.  So sensible, but after a poor initial batch involving sirloin tips and too-buttery dough, I had to start from scratch.  I was looking for something in a chicken, baked not fried, and maybe a little sweet.  That’s when I found Anya Von Bremzen’s recipe for pastela moruna, Moorish chicken with dried fruits and nuts baked in puff pastry, a specialty of Granada.  As she explains, local food historians trace its origin to the Alhambra’s Moorish aristocracy though its likely to have come from North Africa.

Van Bremzen also cites Sophie Coe’s description in America’s First Cuisine of a banquet given by Hernán Cortés in Mexico City in 1538 where an enormous empanada was served.  When the crust was broken, live rabbits and birds leapt out.  I decided to save the puff pastry for another time but knew I’d found my filling for the empanadas.  It wasn’t leaping rabbits and palace tales, but spiced with sweet paprika, ginger, cumin and cinnamon, it was like making a tiny pastry suitcase for my favorite things then eating it. 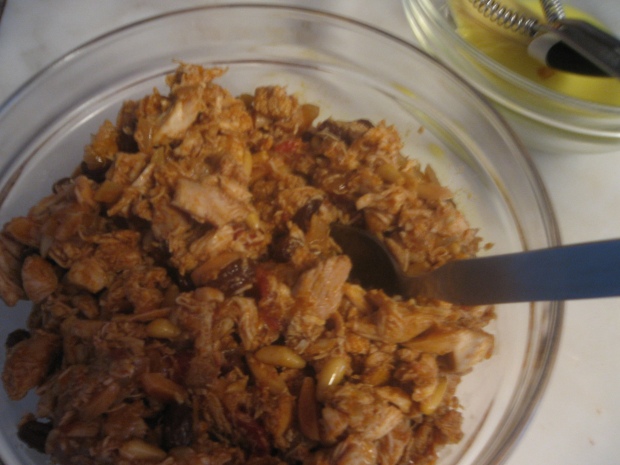 In a large skillet, heat the olive oil over medium-high heat. Add the onions and saute until soft, about 3-5 minutes.  Continue to cook over medium-low heat until translucent and just beginning to brown, an additional 10-15 minutes.  Add 1-2 teaspoons of  olive oil or chicken broth if skillet dries out.  Add chicken and cook for 1 minute.  Stir in paprika, cumin, ginger, cinnamon, and cayenne.  Add chicken broth, tomatoes, and raisins.  Cover and cook for an additional 12 to 15 minutes until most of the liquid has evaporated.  Remove from heat.  Season with salt to taste and set aside till cool.

On a floured surface, roll out the dough to about 1/8 of an inch and cut it into circles about 5 inches in diameter. Lightly brush ridge of circle with egg glaze.  Place two tablespoons of filling in the center of each circle and fold in half. Seal the edges with the tines of a fork or the pinch and twist method.*

Brush with egg wash and lightly sprinkle with sugar.  Bake in upper and lower thirds of oven, switching position of sheets halfway through baking, until golden, about 25 minutes. Transfer to a rack to cool at least 5 minutes.  Serve warm or at room temperature.

*Click here for an easy to follow demo of the latter technique posted by From Argentina With Love.

Homemade Empanada Dough
This recipe is adapted from A Taste of Old Cuba by Maria Josefa Lluria de O’Higgins.  I’d only used this recipe to make smaller, fried empanaditas but they dough worked well.  Click here to jump to a related post.

Combine flour, salt, and sugar into a large bowl. Cut in the butter using a pastry blender or two knives crossed like scissors until the mixture resembles coarse cornmeal.

Mix the egg with the wine in a small bowl. Make a well in the center of the flour mixture and pour in the liquid. Toss the mixture gently to blend then knead the dough until well mixed. Chill for 2 hours.