Recently, when I was asking friends and family how they felt about the sandwich Cubano, I was surprised at how many said they preferred medianoches.  Similar to the Cubano but smaller and sweeter, the medianoche or “midnight” sandwich was sold in Havana nightclubs to tired dancers at late night cafes.  Also tired from my last miss at making a pan de agua loaf, I decided to medianoche bread instead.  If you live in South Florida, making Cuban bread at home makes as much sense as churning your own butter.  It’s as easy to find there as it’s impossible everywhere else, so I was excited to see this recipe for the challah-like bread on the Three Guys From Miami site.  I spent all day fussing over the rolls like a nervous mother – will the yeast bubble, do I knead more, will they rise?

Though I definitely had a few oh no moments along the way, they did.  The final result was all I could have hoped for a first try – a half dozen sweet, eggy medianoche rolls and one so plump it looked like it was going to eat the other five.  Though there was room for improvement, I couldn’t be prouder. 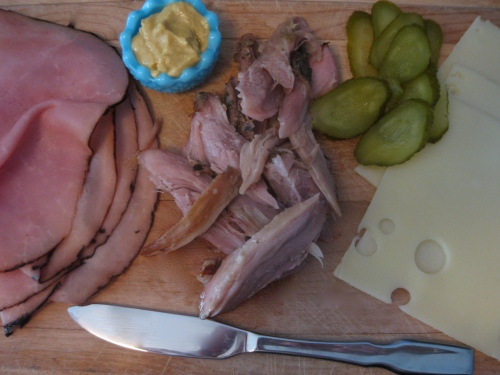 Pan de Medianoche
This recipe is adapted with permission from Three Guys From Miami Cook Cuban by Glenn Lindgren, Raúl Musibay, and Jorge Castillo.  I also followed their direction for making the actual sandwich, mostly because I love that they listed mayonnaise as an ingredient only to point out that it has no place in a medianoche.  Click here for their medianoche recipe.

In a large bowl, mix yeast and three tablespoons sugar in one 1 1/4 cup of water. Place in a warm place and wait for the yeast to begin bubbling. (If it doesn’t bubble and foam, you have some bad yeast or something else went wrong and you’ll need to start over.)

Beat the eggs until foamy.  Add the eggs, the rest of the sugar, salt, and melted lard to the yeast/water mixture.

Using a mixer fitted with the dough hook attachment on low speed, add four cups of flour, one cup at a time.  Continue to beat on medium, until the dough just begins to pull away from sides of bowl.

Pour dough onto a lightly floured surface and knead in remaining cup of flour, as needed, until dough is smooth and elastic, about 10 minutes.  Form dough into a ball place into a large, greased mixing bowl, immediately turning over so that all sides are greased.  Cover with a piece of lightly greased plastic wrap and set aside in a warm, draft free place until doubled in bulk, about 2 hours.  At this point it can be refrigerated over night and brought to room temperature before proceeding.

Place the dough on your work surface and punch it down.  Divide the dough into good-sized handfuls.  Roll each handful on a lightly floured surface to make cylinders about five inches long and about 2 1/4 inches in diameter. Arrange rolls on a lightly greased baking sheet.  Cover with a slightly damp, clean towel. Let rise in a warm place for about one hour or until the rolls double in volume.

Brush the tops of the rolls liberally with the egg glaze. Bake until golden brown — about 25 to 35 minutes. Remove the rolls from the oven, take them off the baking sheet and let cool on a wire rack. While they are still warm, brush the tops with a little melted butter. Use for medianoche sandwiches, or serve warm as a side dish.