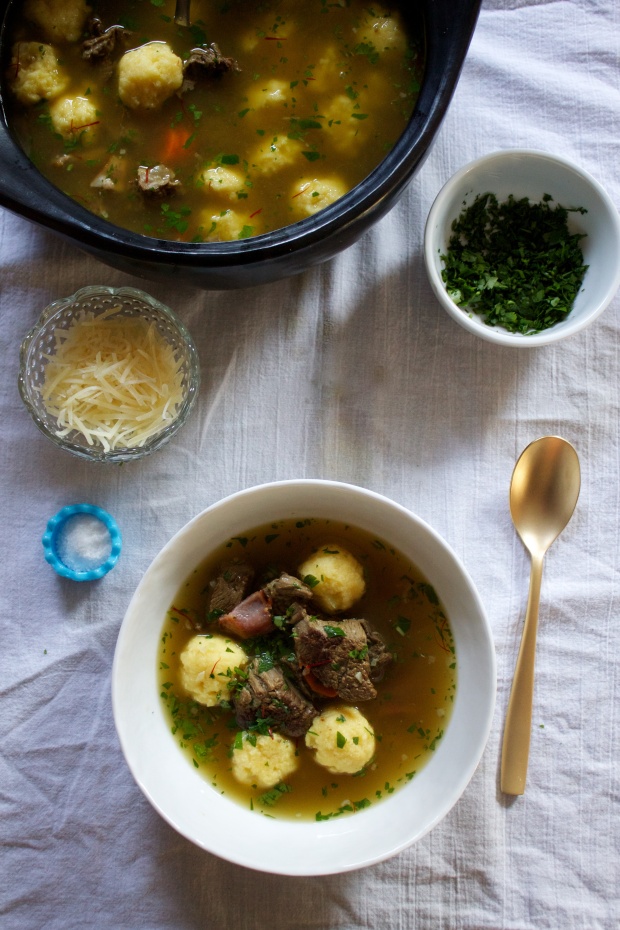 A couple of months ago, I was asked to do a small write up on Felipe Rojas-Lombardi for the launch of the Celebrity Chef stamps series.  I’m embarrassed to say that I didn’t know very much about him when I started.  Though he was famous for his work with James Beard, was the founding chef of Dean & Deluca, and introduced countless Spanish and Latin American food traditions to New York’s culinary scene at his Chelsea restaurant The Ballroom (tapas for a start and quinoa no less), his career predated the chef as celebrity phenomenon and it was sometimes hard to pull up information.  Still when I did find articles, some scanned into pre-Google archives, I found some answers to things I’d always wondered about.  For one, it explained why gourmet prepared food counters (like the one he developed for Dean & Deluca) are essentially Peruvian though they would never fall into the “ethnic” food category (he predated those facile distinctions as well).

Fortunately, his books are still available, and I’ve barely put away his Art of South American Cooking since it arrived.  Now that we’re into our deep freeze months, I’ve been more or less living inside the soup chapters.  The timing was perfect.  La Toque Blanche in California started carrying our La Filosofia aprons and they sent me samples of la chamba clay pots to try.  Speaking with Max Nelson, whose family has been importing la chamba for 10 years, you realize how often we misuse the word artisanal.  Just 6 hours south of Bogota on the Magdalena river, families have been making the pots in much the same way for more than three hundred years.  Using the area’s black clay rich with micah deposits that stand up to really high heat, the clay pots are shaped, burnished with river stones, then dried and pit fired.

Max insisted they can go from the stove-top to the oven to the table which I’ve really enjoyed confirming with everything from the ajiaco bogotano to Ottolenghi’s rice recipes to Lombardi’s Bori-Bori included here.  Shiny black and all curved edges, they seemed more decorative than anything else and I rarely used the small one I had until now.  As beautiful as they are utilitarian, it’s always amazing to “discover” something that’s been right there all along.

Wipe the meat with a damp cloth and cut into 2-inch cubes. Sprinkle with black pepper.

In a large saucepan or sauté pan, heat the olive oil and bacon over medium heat. Sautée until the bacon has released most of its fat, about 1 minute. Add the meat cubes and brown on all sides, about 8 to 10 minutes. Ad the onion, garlic, celery, carrot, bay leaf, cloves, 1 tablespoon of salt and 3½ quarts of water and bring to a boil. Lower the heat, cover, and let simmer for 1½ hours, or until the meat is tender.

Remove the pot from the heat.  Remove the meat and set aside.  Strain the stock through a fine sieve, pressing to extract all the juices from the vegetables; discard the vegetables. Let the stock sit for a few minutes. Degrease thoroughly, then pour the stock through a  strainer lined with several layers of cheesecloth.  Discard the cheesecloth and measure the stock; you should have 10 cups. If not, add enough water to make 10 cups. Set aside.

Meanwhile, in a bowl, combine the cornmeal, Parmesan, and 2 teaspoons of salt and mix well. Add the minced onion and butter and with your fingers or a fork, incorporate all the ingredients well.  Make a well in the center and place the egg and egg yolk in it. Mix with a fork until the eggs have been thoroughly absorbed.  With your hands, knead all the ingredients right in the bowl for a minute or so, until you have a smooth and compact dough. Tightly cover the dough with a piece of plastic wrap and let it rest at room temperature, undisturbed, for about 30 minutes or more.

Divide the dough into 30 equal portions (each 1 scant tablespoonful) and with the palms of your hands, gently roll each portion into a small dumpling.

In a large saucepan, bring 3 quarts of water to a boil. Lower the heat to a gentle simmer, drop the dumplings into the water, and let cook for 15 minutes. Remove them from the water with a slotted spoon and set aside.

In a large pot or sauté pan, bring the reserved 10 cups of broth to a boil, adding saffron, if using. Lower the heat and add the meat; cook for 15 minutes and correct the seasoning with salt to taste. Gently places the dumplings into the broth and continue simmering 15 minutes more. Serve the soup at once sprinkled with chopped parsley.  Pass the parmesan at the table.