With the days getting crisp, it seemed like a good time to pick up my much delayed Italian travelogue where I left off – Venice.  I’d been once before on a rushed trip that I would describe as a 36-hours of disorientation broken up by moments of heart-stopping beauty – mostly gilded.  It’s all very romantic until you realize just how lost you are and panic sets in.  A dense concentration of  sites that you have to see at least once surrounded by an even denser network of tourists traps hotels, restaurants, bars, and souvenir shops, it was impossible to visit one without falling into the other – especially during our abbreviated trip.  On the last day, I felt a little bolder and found myself in Cannaregio.  It was the first sign of normal life I’d experienced there, and I promised myself that next time would be different. 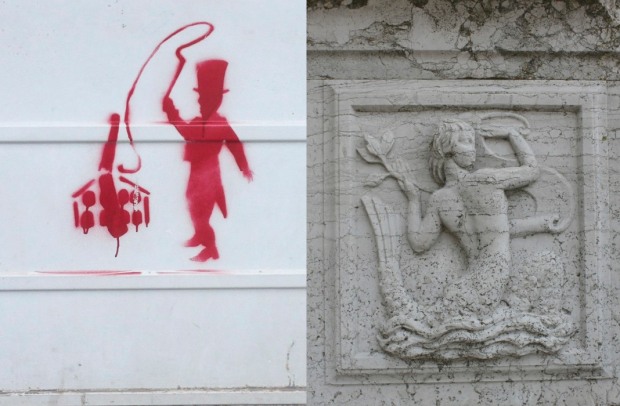 When I finally did visit again, it was and it wasn’t. We arrived on my sister’s birthday and her only wish was to see the Peggy Guggenheim Collection. After a few train delays and hold up picking up keys and dropping off luggage, it felt like we just weren’t going to make it and considered giving up on the plan altogether. Assuming an optimism I didn’t feel, we tried anyway and made it with just enough time. Although it in no way happened like this, walking underneath the elegant archway partly hidden down a picturesque alley that takes you into the collection felt something like sliding into home. Flush with success and anxious to show our mother other parts of the city, we got hopelessly lost almost immediately in the crowded streets behind San Marco. Our evening was saved when washed up at I Figli Delle Stelle for a lingering pink-tinged family meal on Giudecca. 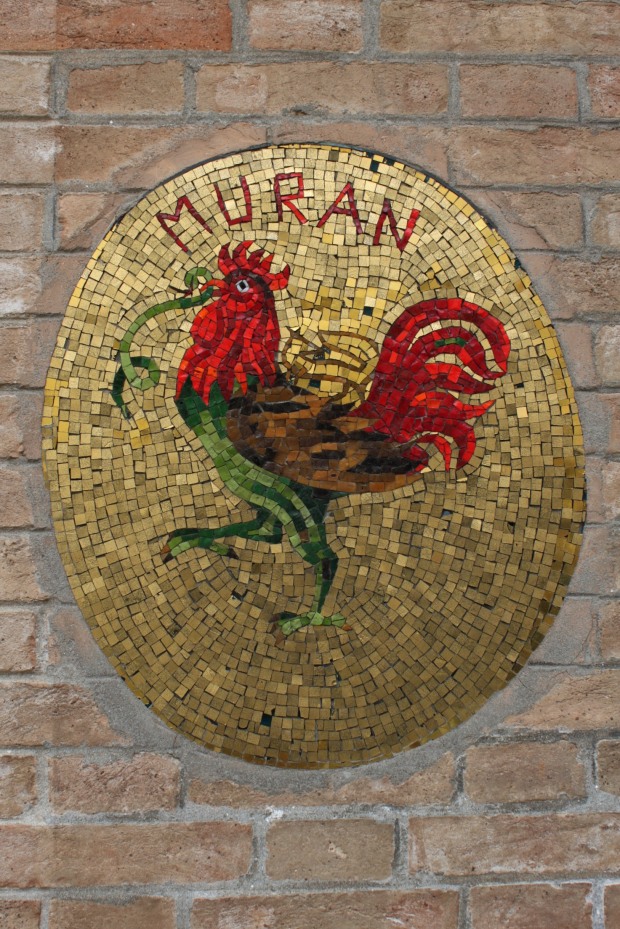 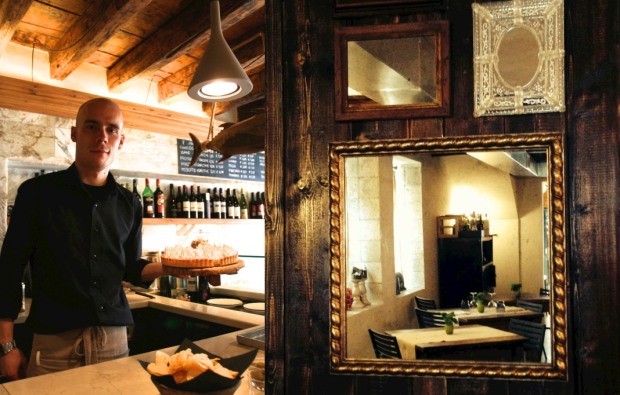 The rest of our time there was characterized by the same breaks and misses – under the wire timing, lost vaporetto passes and disgruntled ticket takers, false starts and long lines.  I’d been warned away from tours to Murano but when we went on our own it was actually a lovely afternoon – plus it’s the perfect kind of thing to do with your mother.  I didn’t have any plan for where we would eat there but came across Acquastanca which drew me in because it was the only one that didn’t have outside tables.  Heading to the Rialto Market on our last morning there, I found myself in in standstill tourist traffic for the first time but floored by the 700-year old market – and the pastry shops that surround it.  We were able to stop into the Drogheria Mascari before rushing back to the Piazza San Marco to make the long climb up to see the horses and visit the Correr Museum which was closing out an incredible Leger exhibit. 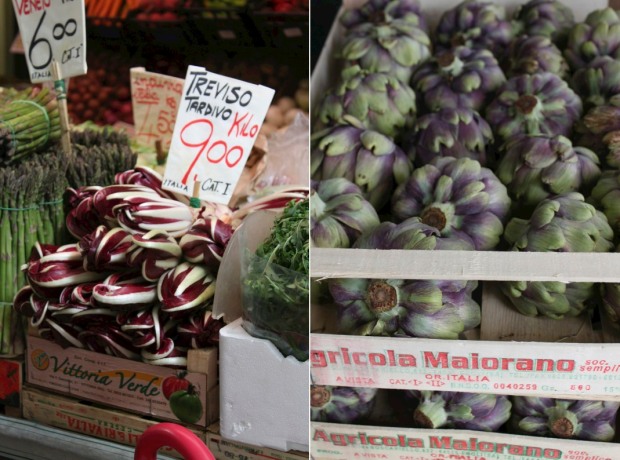 We were nowhere near the peak of high season but it was coming and at times it felt like the city couldn’t absorb the tourism it draws.    It was packed with people but there were times it seemed uninhabited.  Everyone was reserved but polite (for the most part) but you could feel the tension.  Far from becoming more familiar, the city became even more opaque on my second visit and it was hard not to sense that your presence was the  problem and solution in one.  It raised so many questions that I could understand why so many people have written about it.  Since coming back, I’ve been drawn to any book with Venice in the title.  John Berendt’s City of Falling Angels has become a favorite and I’ve finally catching up on Henry James.  As I read, I’ll feel a pang for something I missed but set  it aside and make a note for the next trip which I will definitely do better. 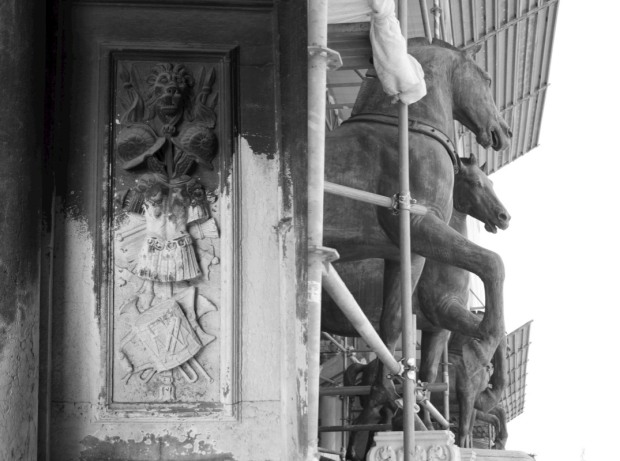 Pasta with Artichokes and Shrimp

In looking for a recipe that summed up my experience in Venice, I kept circling back to the pasta with artichokes and shrimp I had at Acquastanca.  Set inside a converted bakery, it’s run by chef Caterina Nason, a former architect and self-taught cook and her sister-in-law Giovanna Arcangeli who we met while we were there.  This recipe is adapted from Saveur’s Pasta with Grilled Artichokes.  I came across  it when I was figuring out how to trim the baby artichokes.  I can personally attest their guide is foolproof.

Combine artichokes, 2 tablespoons of lemon juice, and plentiful water to cover in a 4-quart saucepan.  Bring to a boil then reduce the heat and simmer until crisp-tender, about 5 minutes.  Drain the artichokes.

Place the artichokes and shrimp in a large glass bowl and toss with olive oil, salt, and pepper.  Heat a grill pan over high heat.  Place the shrimp and artichokes cut side down on the grill.  Reserve the olive oil. Cook until the artichokes are tender and the shrimp are cooked through, about 6 minutes per side.  Tent with aluminum foil.

Bring a large pot of salted water to a boil and add the pasta.  Cook until al dente, 9 to 11 minutes. Drain the pasta and reserve 1 cup of the water. Heat reserved oil and 3 tablespoons butter in a 12″ skillet over medium heat; add chile flakes and garlic and cook, stirring, until garlic is soft, 4-5 minutes. Add remaining lemon juice along with zest, cooked pasta, and ½ cup Parmesan and toss together, adding reserved pasta water as needed to create a smooth sauce. Stir in remaining butter and parsley and season with salt and pepper. To serve, divide pasta evenly between four bowls and top with artichokes; garnish with Parmesan and parsley. 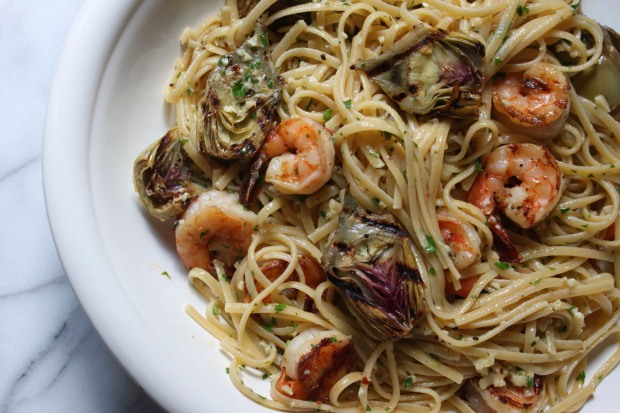 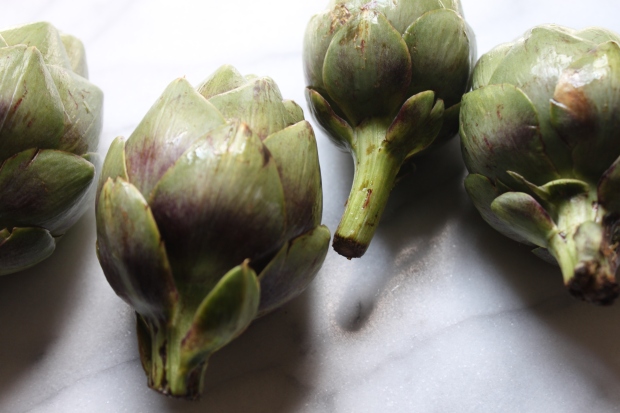 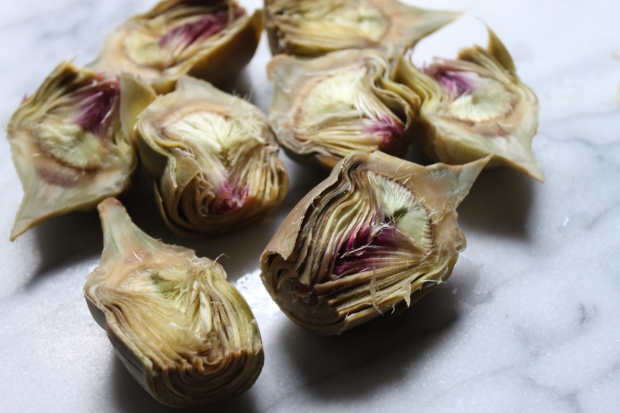 As with Florence, I’ve included a few links below to some of my favorite places: 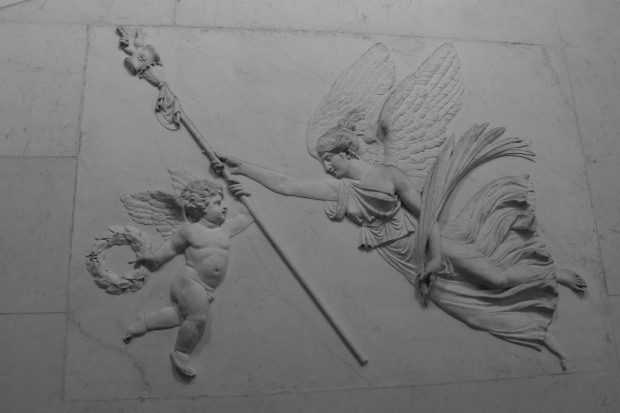