Since I’m heading to Miami ING half marathon in a few days, I wasn’t sure if  I’d have time to post. Snow-bound this weekend, Iwas looking for a project when I turned to Elizabeth Lambert Ortiz’s The Book of Latin American Cooking and found a great pre-run option that I could just about get in.  I’ve always had a weakness for around the world books and this one’s been a resource for awhile though I haven’t included it until now. I’ve rarely see Ecuadorian recipes so I decided to make Llapingachos. Essentially potato cakes combined or stuffed with onions and shredded cheese then browned on both sides. I was most attracted to the sides – salsa de maní, lightly dressed tomatos, browned chorizo, fried eggs or bananas to name a few.

More delicate than they seemed, when I actually got them to the griddle they wouldn’t turn easily. Other sites had warned me and Laylita’s Recipes suggests chilling them after they’re shaped so they hold their form when heated. Setting them over a higher heat gave me a smooth crust right away making them easier to manipulate. It was only when I started playing around with the heat that it got messy. Fortunately, I had several tries to get it right. 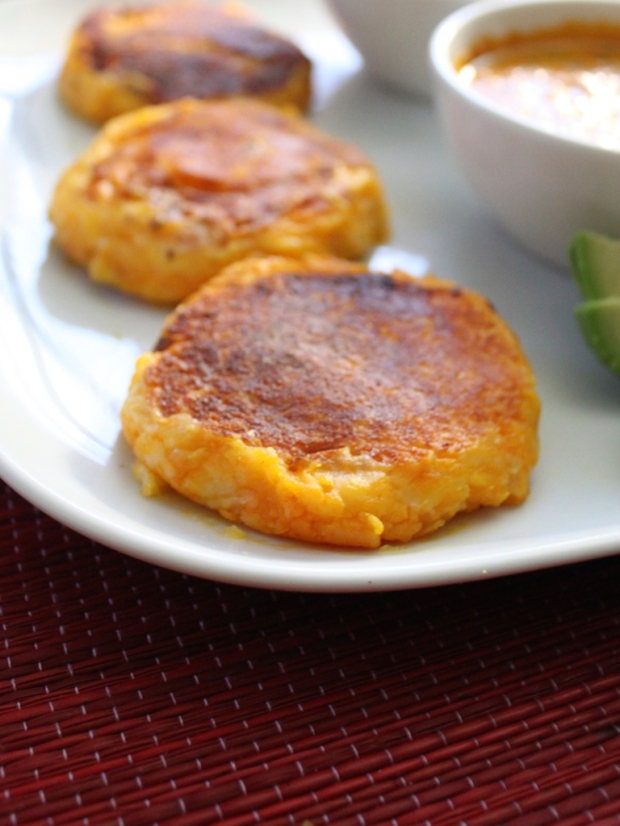 Lightly score each potato around its circumference. Place potatoes in a large, heavy pot with enough cold water to cover and a 2 heaping tablespoons of salt. Bring to a boil then adjust heat to maintain a steady simmer. Cook until tender, about 20-30 minutes depending on the size. To test, pierce the potatoes with a sharp knife. An undercooked potato can be pulled from the water with the knife but a cooked potato will drop off and remain submerged.

Drain the potatoes. When cool enough to handle but still warm, peel the potatoes by pulling off the skins (scoring beforehand makes this easier). Pass through a ricer or food mill into a large mixing bowl.  Blend in the sautéed onions.  Add the shredded cheese and blend well. Allow potato mixture to rest at least 30 minutes before shaping.  Shape into even discs, about 1/2 cup per cake.  Chill until ready to use, at least 30 minutes.

Heat skillet to medium high heat. Brush the skillet with annato oil and place on skillet until well browned. Brush the tops of the cake with annatto oil and carefully turn to brown the other side.

Combine peanuts and milk in a blender or food processor and pulse until smooth.  Set Aside.

Heat annatto oil in a heavy skillet over medium.  Add the onions and garlic and sautée until the onions are softened, about 5 minutes.  Stir in the peanut-milk mixture and bring to a simmer, about 2-3 minutes. It should pour easily like cream, stir in milk as needed to get the right consistency.  Remove from heat and stir in cilantro.