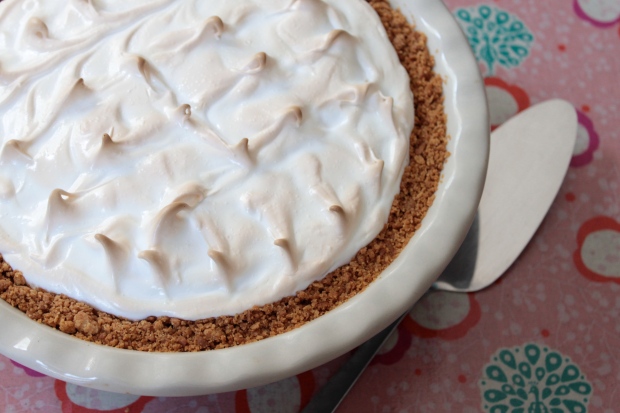 I had planned on a new post but plans were hard to hold onto this weekend – temperatures soared, ovens broke, and friends got married. So in lieu of a new post, I decided to let life be life and repost one of my favorites from last summer.

But Is It Cuban?
Looking back at my summer posts, I noticed a lot of limes on the side or off in the corner – standing by to restore the balance to anything too heavy, too rich, or just too fried.  With Labor Day coming up, it’s was only right to bring them front and center in a key lime pie.  I thought it would be a departure from my Latin American desserts when I came across a few references to the Cuban pastel de limón.  Made with juice from limones criollos – also known as key limes – and condensed milk, the custard is topped with meringue, and poured into a cookie crust made from galleticas Maria.  Could the key lime pie be Cuban?  According to Maria Josefa Lluria de O’Higgins, a version of the pie was brought to the Florida Keys in the late 1860′s with Cuban settlers during our war for independence.  Other alleged sources include self-made Florida millionaires, their cooks and local fisherman.  While I can’t pretend to be impartial, I will say this – creole limes, condensed milk, meringue – it certainly sound like us. 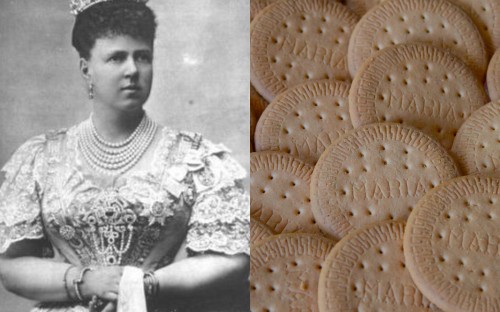 The origin of the galleticas Maria used for the crust is less ambiguous but far more grand.  I always thought Maria was the little girl in pig tails on the bright gold package of vanilla biscuits my grandmother would give us for an afternoon merienda.  Not so.  They were actually created by English confectioners Peek Freans in 1874 to commemorate the wedding of Grand Duchess Maria Alexandrovna of Russia and H.R.H Alfred Ernest Albert Saxe-Coburn-Gotha, the Duke of Edinburgh, Queen Victoria’s second son, in the Winter Palace of St. Petersburg.  Even now, her name, Maria or Marie (depending on where they’re made) is at the center of every one, surrounded by an intricate border, a period reference to Russian architectural design.  It’s possible that they could have made their way into the Cuban version of the Florida pie around this time though it’s hard to tell.  Popular throughout Europe and Latin America dipped in milk, coffee or tea, they were partly credited with Spain’s post-civil war recovery when a wheat surplus led to a Maria mass production. 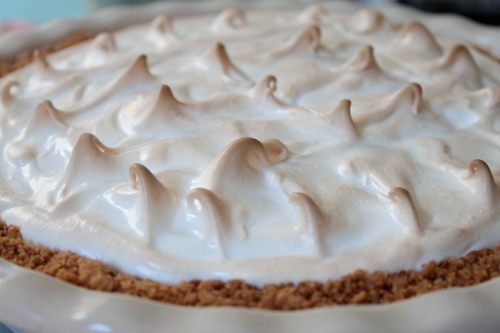 More complicated than I’d imagined for a five ingredient pie, it made me wistful for a simpler time.  My grandparents had a key lime tree in their backyard and my grandmother would have us gather them when they rained down, hiding in the  grass and tripping us up.  Small, hard, and thorny, they weren’t pretty like lemons or juicy green like limes so I didn’t associate them with the creamy yellow pie I loved.  A hurricane in the 1926 wiped out most commercial key lime harvests in the U.S. making these scattered back yard trees that much more precious.  Though I keep a bottle of key lime juice in the refrigerator, I always buy a bag of the fresh ones, mostly imported from Mexico, when they make a rare New York appearance.  As happy as I am to find them, I kick myself a little for not appreciating them more when they were literally falling from the sky. 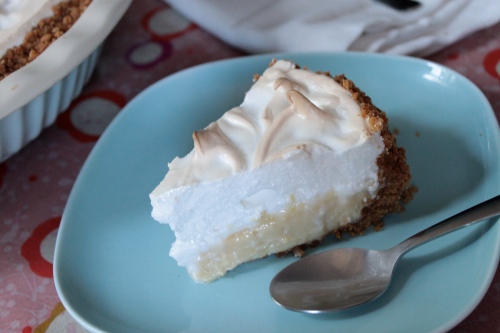 Pastel de Limoncitos Criollos/Key Lime Pie
Inspired by A Taste of Old Cuba by Maria Josefa Lluria de O’Higgins.  Floridians are very protective of their pie and there are disagreements about whether it should be a crumb or pastry crust, baked or not.  One thing everyone agrees on is that the pie should be yellow. Key limes turn yellow as they ripen so a toxic green custard is the sign of a bad dye job.  They can be hard to find and regular limes can be substituted, but I suggest using bottled key lime juice rather than fresh regular limes in this case.  Galletas Maria can be found in most Latin American and some large chain grocery stores and graham crackers can also be substituted.

For the crust:
30 galletas Maria (about 2 cups), well ground but not powdery*
6 tablespoons of unsalted butter, melted

For the meringue:
4 egg whites, at room temperature
1/8 teaspoon cream of tartar
Pinch of salt
1 cup of sugar

In a large mixing bowl, combine the cracker crumbs and melted butter until the mixture holds together.  Fill the prepared pan with the crumb mixture and press into the bottom and sides of the pan to form the crust.  If necessary, use a measuring cup to level the bottom and sides.  Bake 10-12 minutes until lightly browned.  Remove from oven and set aside to cool completely.  Freeze until ready to use.

In a stand mixer fitted with the paddle attachment, beat the egg yolks on medium until pale and fluffy.  Reduce the mixer speed and slowly add the condensed milk then the Key lime juice until well incorporated.  Pour the mixture into the pie crust (see note).

In a stand mixer fitted with the whisk attachment, beat egg whites on low speed until foamy, about a minute.  Add a pinch of salt and cream of tartar and increase speed to medium until they hold soft peaks.  Gradually add the sugar and remaining lime zest and beat on high speed until it forms stiff peaks.

Cover the pie with the meringue and bake until lightly browned, about 12-15 minutes.  Allow to cool and completely and chill until ready to serve.

Note:  Instead of meringue, the pie can also be topped with freshly whipped cream.  At this point, bake the pie as directed then top with whipped cream before serving.