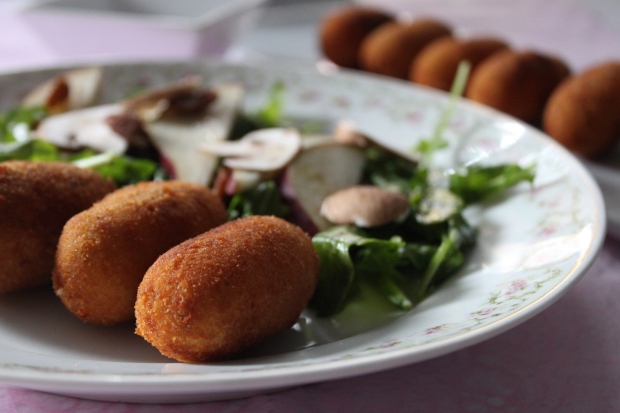 When chef Michelle Bernstein described Miami’s lunch counter croquetas as “leaden”, I hated to admit that she was right.  Made of pureed ham, chicken, or beef, they’re often left to sit out in glass cases for hours.  Even if you’re lucky enough to come across a freshly fried batch, it’s more ham spread than creamy béchamel.  On a recent trip home, I had one from an otherwise good bakery filled with a flourescent paste that could not have possibly been found in nature.  Sold in large trays for family parties, the tiny versions pack an even weightier punch.  Still, I haven’t given up on them yet.  Using any excuse to visit the crowded coffee stands and bakeries that dot Miami, they’re usually the first thing I ask for when I land and the last thing I pick up on my way to the departure gate.

Tired of tilting windmills (or in this case ventanitas) looking for a great croqueta, I tried this version of croquetas with Gorgonzola and jamón Serrano from Cuisine à Latina.  Served with dollop of fig jam, it was a perfect balance of sweet and savory.  I love appetizers for lunch so I threw together a salad of arugula and sliced pears to have with them.  It was lovely though I missed the banter of people crowding the bakery windows, the constant whir of the espresso machine, and the pack of saltines and wedge of lime that comes with every order of croquetas, leaden or not – the cost of going it alone. 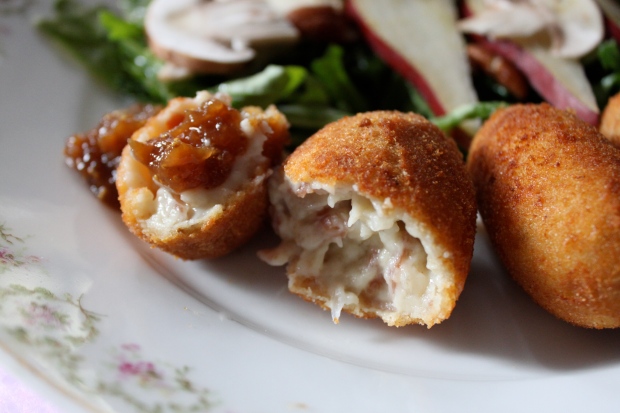 Croquetas with Blue Cheese and Jamón Serrano
This recipe is adapted from Michelle Bernstein’s Cuisine à Latina and can also be found here.  Though a little labor intensive at first, they can be made ahead and frozen so they’re prefect for parties.  I would try them with prosciutto as well.

Line a baking sheet with parchment or wax paper and set aside.

Melt the butter in a heavy saucepan over medium heat.  Add the onions and sauté until soft but not browned, about 4 minutes.  Add the ham and cook about one more minute.  Add the flour and cook, stirring constantly until well incorporated, about 4 minutes.  In the meantime, gently heat the milk until hot but not boiling.  Gradually stir in the milk, turning constantly until the sauce has thickened and is pulling away from the sides of the pan.  Add the Gorgonzola and stir until its completely melted.  Season with salt, pepper and cayenne.

Pour the mixture onto the lined  baking sheet using a rubber spatula to spread evenly.  Bring to room temperature then cover with plastic wrap and refrigerate until set, at least one hour.

Lay out 1/2 cup of flour, beaten eggs, and bread crumbs in separate mixing bowls.  Dust hands with flour and spoon the béchamel mixture into walnut sized pieces and roll into desired shape.  One by one, roll the croquetas in flour, then drop into egg mixture with a fork or slotted spoon, then transfer to bread crumbs.  They should be completely coated in bread crumbs or they will leak when cooked.*

Add about 3″ of oil to a large heavy skillet.  Heat over medium-high heat to 360°F.  Working in batches, carefully add the croquetas.  Gently turn until brown on all sides, about 3 minutes.  Remove with a slotted spoon and drain on paper towels or re-purposed grocery paper bags.  Return the oil to 360°F between batches.  Serve immediately.

*At this point, the croquetas can be frozen up to 1 month.  Arrange them on a baking sheet and freeze until firm then transfer to an airtight bag and freeze. Do not defrost before frying.