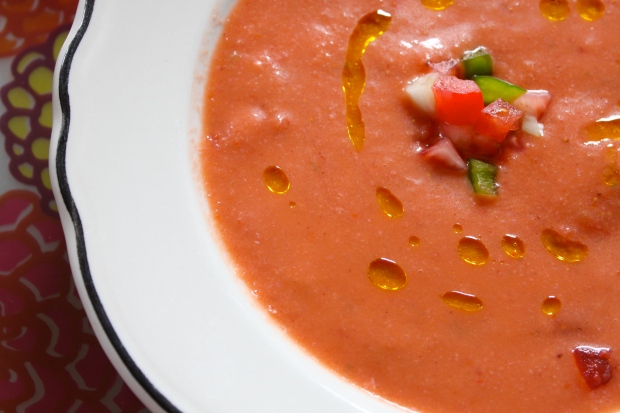 When you decide to run a marathon, it’s easy to focus on the 26.2 miles of race day and forget about the 12, 13, 14, 15+ miles you’ll run as you train – a weekly rehearsal for a play that gets longer and longer.  On top of that, there are cross-training sessions, recovery runs, and now hill repeats.  Not only do I have no one to blame, I spent the better part of last year qualifying for the privilege.  When asked why I like to run, I usually tell people that it gives me time to think.  Carving out a path in the miles stretching out before me, my mind clears.  Unfortunately, it clears it up a little too well so that by the time I get home exhausted, I have the internal monologue of a cave woman – hot, cold, tired, hungry, water, food.  Before my scheduled de-evolution this week, I decided to make a batch of gazpacho. 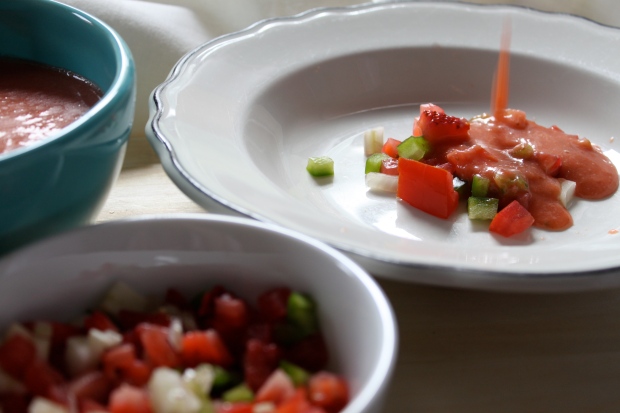 The markets are filling up with heirloom tomatoes and fresh peppers but I wanted to try something  different.  After a quick search, I found a recipe for gazpacho made with tomato, strawberries and fennel from Spanish chef Adolfo Muñoz.  I was curious about the strawberries used in lieu of the usual sherry vinegar, but what sold me was the fennel.  I love it but forget to use it until I come across it staring reproachfully from a list of super foods.  Before heading out, I cubed and toasted the bread, chopped the fruit and vegetables and,  in a few whirs of the blender, I had an overflowing pitcher of cold comfort chilling in the refrigerator while I attacked the hills of Prospect Park (the hills won).  Getting home in my usual fog, I quickly poured some out, each spoonful bringing me back to my civilized self – the perfect restorative for a Quixotic pastime. 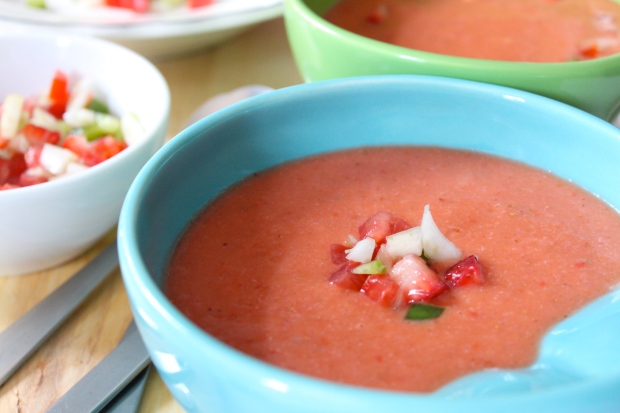 Adapted from Food and Wine, October 2003 by Adolfo Muñoz.  I found a second version of this recipe in Anya von Bremzen’s The New Spanish Table where the mixture is transferred to a blender and pureed for a smoother blend.  If you have powerful food processor you may be able to skip this step, but I don’t so I used the blender.

Preheat the oven to 350°.  Scatter the bread cubes on a baking sheet and bake for 7 minutes, or until crisp. Let cool.  Meanwhile, combine the diced tomatoes, strawberries, pepper and fennel in a small bowl. Refrigerate until chilled.

In a large bowl, combine the chopped tomatoes, strawberries and bell pepper with the sliced fennel, garlic and bread cubes and let stand for 15 minutes.  Working in 2 batches, puree in a food processor, adding half of the olive oil to each batch (see note).  Add to a blender and puree until smooth.  Transfer the mixture to a large bowl and stir in the mineral water.  Season the gazpacho with salt. Refrigerate for about 25 minutes, or until chilled.

Spoon the diced mixture into shallow soup bowls and ladle the gazpacho on top. Drizzle each bowl of soup with olive oil and serve.