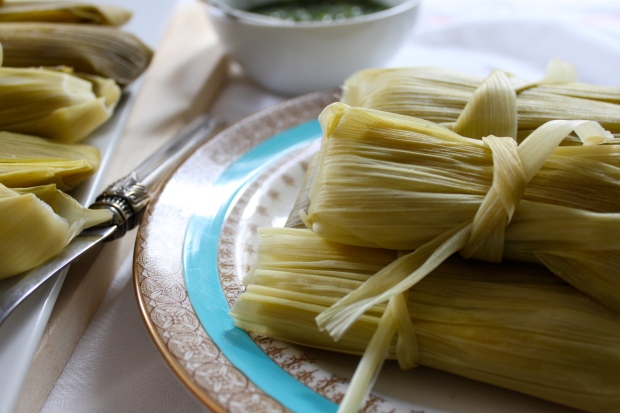 I’m a little late in posting this recipe for humitas.  Though I read about them weeks ago and made my first batch a couple of days ago, a lot of have-tos (and a few want-tos) have gotten in the the way.  Initially, I didn’t recognize them as the tamales I’d grown up with.  They were of course and they weren’t.  Depending on whether you’re in Argentina, Bolivia, Brazil, Chile, Colombia, Mexico, Peru, Venezuela or the Caribbean, they’re known as humitas, humintas, tamales, tamalli, tamalitos verdes, chapanas, bollos, choclotanda, chumales, cachapas, chapanas, chiguiles, envueltos de mazorca, ayacas, hallacas, juanes, pamonhas.  The filling can be sweet or savory, made with fresh or dried corn, plantains or potatoes, wrapped corn husks, banana leaves or parchment paper,  steamed or baked, served as a snack, side dish, casserole or heavy stew.

With so many possibilities, I decided to get specific, choosing a version of Ecuadorian humitas from Maria Baez Kijac’s The South American Table, my new favorite. Lighter than the pork and chicken filled tamales I’d had before, these were made of fresh corn pureed with scallions then blended with egg yolks, milk, cheese, and a little brandy.  The filling is wrapped in corn husks and steamed then topped with ají criollo, a hot pepper sauce.  Most recipes tell you that the water content of North American corn is too high in water and too low in starch.  Kijac solves this problem by adding cornmeal to get the right consistency.

I was tempted to make them with whatever corn I found but waited for fresh, whole corn to reach the markets instead.  Once you scrape the kernels, the cobs can be used to line the bottom of the pot to create a shelf that’s lined with loose corn husks for added flavor (and Swiss Family Robinson efficiency).  I set  the wrapped humitas over the improvised steamer, covered them with the remaining husks, and brought the water to boil.  Of course, I could have used my metal steamer or added a tamalera to my precariously packed shelves.  I didn’t have to use the cobs, and won’t always, but at least this time, I wanted to. 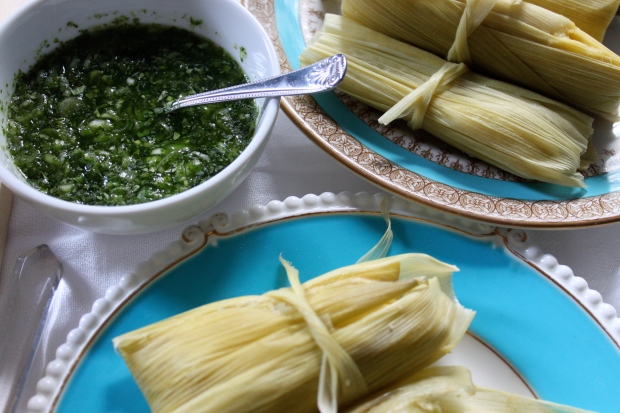 Humitas Ecuatorianas
Adapted from The South American Table from Maria Baez Kijac.  Filling the corn husks can be tricky and the size will vary depending on the size of the husks and your stuffing skills.  I started out messy but got better as I went along.  Click here for Saveur’s guide on handling humitas.

Bring a large part of water to a boil.  Cut through the corncob at the stem end where the kernels start and carefully remove the husks.  Set aside the largest for wrapping and blanch them in boiling water for a couple of minutes to make them more pliable.  Remove from the water and drain on paper towels.  Cut the rest of the husks into strips for tying or to cover the humitas before steaming.

Remove the silk from the corn and rinse.  Cut the kernels from the cobs, adding the milk scraped from the cobs. Reserve the cobs for later use. Place the corn and scallions in food processor or blender and pulse until finely ground. Add the butter, egg yolks, cornmeal, baking powder, salt, sugar, cheese, and brandy.  Pulse until well incorporated and smooth and transfer to a bowl.  The mixture should be thick but not runny. Add more cornmeal, as needed.

In a seperate bowl or using a stand mixer, whip the egg whites to form soft peaks. Carefully fold the whites into the corn mixture.

To assemble the humitas, place two husks on the worktable, slightly overlapped. Place a few spoonfuls of corn batter in the center of the husks. Fold bottom edge over the mixture, fold down the top half, then fold in the sides to form a packet.  Tie with string or corn husk strips.  Repeat with remaining batter.

Place the cobs in the bottom of a large saucepan. Add the water until cobs are almost covered. Cover the cobs with the remaining husks. Place humitas open side up over steamer. Cover with remaining husks. Cover the pot and bring to a boil. Steam until the humitas feel firm to the touch, about 30 minutes for small and 45 minutes for large. Add more boiling water if needed.  Remove from heat and serve with ají criollo.  Leftovers are great for breakfast and can be reheated or pan fried.

Place peppers, 2 tablespoons of the water, and the salt in a blender and process until smooth.  Transfer to a small bowl and add the scallions, cilantro and remaining water and mix well.