I’ve had one recurring thought since I tasted my first chirimoya a few months ago – there are parts of this world where flan grows on trees.  Flan on trees.  I’ve been pining for chirimoyas, also known as custard apples, ever since.  In response to my previous post where I used them to fill pavlovas, my aunt described an alternative recipe that’s popular in Peru.  The chirimoyas are folded into manjarblanco  that’s been lightened with whipped cream and chilled, like dulce de leche pots de crème.  I went back for more to but it’s been weeks since I’ve seen them.  Then suddenly, there they were, looking proud but out of place at the Park Slope Food Coop.  I scooped up a pretty heart shaped one and let it ripen on my counter like an avocado.  After the whirl of Easter weekend had passed, I finally got down to using them.  It was as simple as it seemed and the fresh fruit provided the right balance to the manjarblanco.  I don’t know when I’m going to find them again but I’ll always look.  From the moment the last scoop was served, I started to miss them. 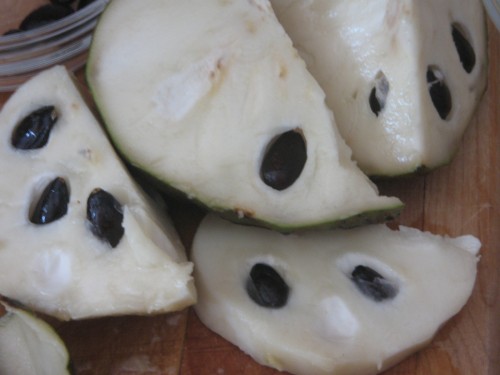 In a large bowl, beat the heavy cream on medium speed until soft peaks just form.  Add manjarblanco and continue to beat on medium high until firm peaks form.  Fold in the vanilla extract and chopped chirimoya.  Pour into individual ramekins and chill for at least two hours.  Sprinkle with ground cinnamon and serve.