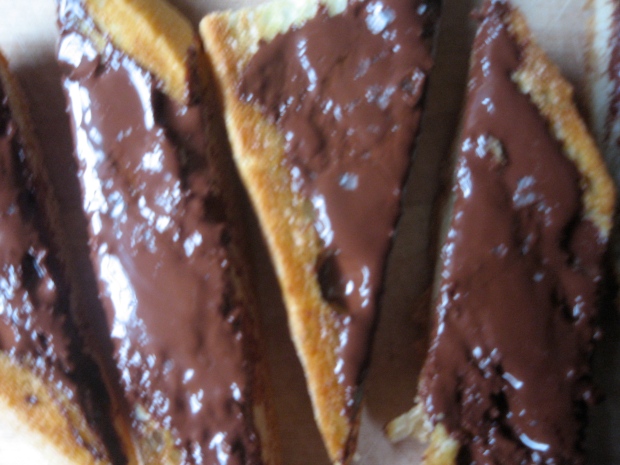 Since August has been more hectic than I’d planned, I’ve been enjoying my own kitchen vacation this week.  With family visiting,  I’ve avoided my usual pitfall of putting together an over ambitious meal with only a 50/50 chance of success.  This morning I kept it simple.  I found a Catalan recipe in Anya Von Bremzen’s The New Spanish Table for toast with chocolate and olive oil.  Just a baguette brushed with olive oil then toasted or broiled for a couple of minutes till golden, covered with melted dark chocolate then sprinkled with Maldon sea salt.  With only a few basic ingredients, I can dwell on which chocolate to use or whether my olive oil is sufficiently “fruity”.  An easy lesson learned, and something to remember the next time I’m elbow deep in the kitchen.

Melt the chocolate in a double boiler or heatproof bowl over simmering water.  Brush each baguette with olive oil and broil or toast until golden.  Spread each side with melted chocolate, drizzle with olive oil and sprinkle with a little salt.  Cut into individual pieces and serve immediately.