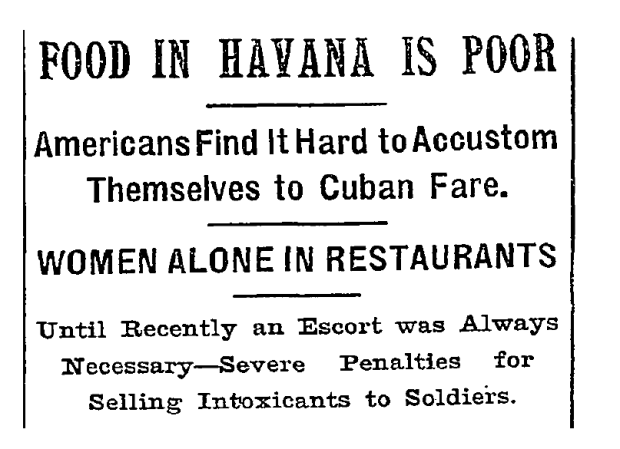 I was trying to solve my Cuban bread problem when I came across this article in The New York Times.  Published in 1899, it’s a fascinating account by Dorothy Stanhope of turn-of-the-century Havana, a city finding it’s bearings after a long fought war of  independence.  Not surprisingly, she finds herself in a very different world:

In going to a strange country one does not as a rule think before-hand what he will eat while there.  He assumes as a matter of course that he will live much as he does at home.  To rid one’s mind of any idea of this kind, it is only necessary to visit Havana.

At least she enjoys the bread:

Cuban bread is very good.  The little loaves-rolls, we call them-are put in banana leaves to be baked.  At the restaurants one is served with French bread.  This, too, is baked in banana leaves, if I mistake not, and often little pieces of the leaves are still clinging to the loaves when they are brought to the table.

Still, my favorite description is of the dairy cows that produce the milk:

Those which do, live in the same house with the dairyman and his family, and as one passes along the street he looks in an sees the cows standing in the family sitting room, contentedly chewing their cuds.  One’s appetite for milk is gone, as a rule, after such a sight as this…