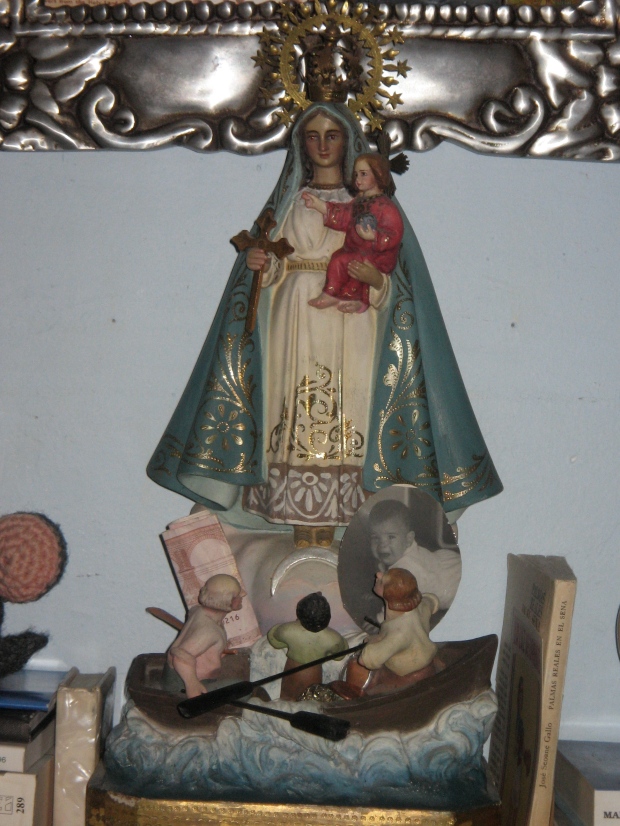 I promised myself that it wouldn’t escalate.  An after-work dinner with a friend in a nearby restaurant became dinner with friends plural at my house.  I know it’s a mistake to try new things on guests. By the time people arrive, I’m too tense/excited/tired depending on how it went that I can’t enjoy myself.  But who can resist a captive audience?

This time I decided to make camarones enchilados, which I had sprung on friends before, so I’d had some practice.  For dessert, I attempted a cream cheese ice cream recipe with poached guava shells from Eating Cuban: 120 Recipes from the Streets of Havana to American Shores.  Because the ice cream is so rich, I had thought to put three small scoops per guava shell.  The boatlike shells holding the scoops reminded me of the three figures found in representations of the Virgen de la Caridad, the patron saint of Cuba.  That’s how I found myself carving figurative saints out of Spanish shortbread dough.  It seemed so right to find a Caridad in butter and sugar, but putting it all together was more difficult.  Everyone enjoyed it, but the ice cream melted a little too much and the smaller cookies kept pitching forward into the improvised guava boats.  It wasn’t till the next day that I was able to balance it all together with what was left.  Next time, it will seem effortless. 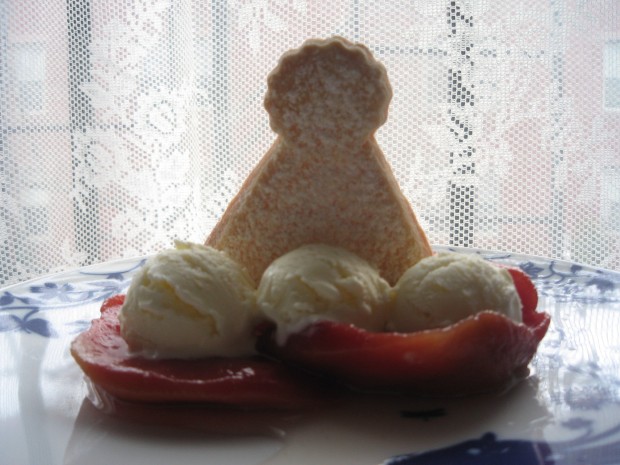 With an electric mixer at medium speed, beat the cream cheese together with the sugar, lemon juice, salt and vanilla.  Gradually add the cream and milk and continue to beat until fluffy.  Transfer the mixture to an ice-cream maker and freeze according to the manufacturer’s directions.

Polvorones/Spanish Short Bread
This is my favorite shortbread recipe adapted from A Taste of Old Cuba by Maria Josefa Lluria de O’Higgins.

Beat together butter with the 1/2 cup of sugar in an electric mixer with the paddle attachment at medium-high speed until it is pale and fluffy.  Add the vanilla extract.

Combine flour and salt and add to mixer at once the stir with wooden spoon or spatula for a couple of turns.  Return to stand and mix on low speed until just incorporated.  Refrigerate until very firm, at least 2 hours.

Preheat the oven to 400 degrees.  Line a large baking sheet with parchment paper or nonstick liner.

Roll the dough 1/8 inch and return to the refrigerator for an additional 15 minutes.  Cut into desired shapes.

Bake them for about 14 minutes, until lightly golden.

As soon as you remove them from the oven sift confectioner’s sugar over the polvorones and set them on a wire rack.  When they are cool, roll them in the sugar again.