When I decided to make bollitos de carita – black-eyed pea fritters made from beans soaked for hours then husked and ground to a paste – I couldn’t believe no simmering would be required.  Left overnight, they were supposed to blister and pucker leaving behind perfectly tender, creamy white beans.  I loved that caritas roughly translates to “little faces” and imagined removing the peel would be as simple as slipping off a mask.  Not so.  Some popped right out but more needed coaxing, and no matter how many I did, there were always more. 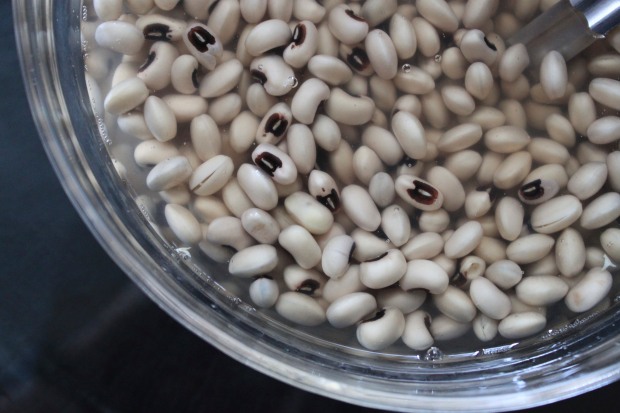 Included in 19th century cooking manuals, according to Mary Urrutia Randelman these fritters were sold by Chinese street vendors calling out “Bollitos! Frituras!” through the streets of Havana.  It all seemed very poetic, but when I sat down to the task I couldn’t help but think it should be easier.  Was there a trick to it that I was missing?  I could picture entire families sitting around the table and pitching in to peel the peas.

The frying at least was simple as promised.  Quickly processed with mashed garlic and lightly seasoned with salt and pepper, I thought the batter was way too loose, but when I dropped it in the oil (with my new favorite gadget the cookie scoop), they puffed up and went gold in a couple of seconds.  In their raw state, they tasted something like soy beans but once fried they had a bread-like texture I wasn’t expecting.  I sprinkled them with lime juice but they really started singing when I added a mango-pepper jelly to set off the bite from the garlic.  A few frituritas later, I decided maybe they weren’t too much trouble after all.

Drain peas and rinse well.  Rub off the outer husks with the black spots, saving the white beans.  Combine the beans, garlic, salt and pepper in the bowl of a food processor.  Pulse until it forms a smooth paste adding water if needed.  Adjust seasoning to taste.

In a heavy skillet, heat 2 inches of oil over medium-high heat to 375º.  Working in batches, scoop out one rounded tablespoon of the bean mixture and add to the oil, 5-6 at a time.  Turn the fritters with a slotted spoon until they are puffed up and golden, about 1-2 minutes.  Be careful not to overcrowd the skillet or the oil temperature will fall.  Remove fritters from oil and drain on paper towels.

Sprinkle with lime and serve.