Last week, for no particular reason, the idea of brunch bothered me. Though I’m sure it’ll pass (most likely around 1130ish next Saturday), the designation of brunch as the catch-all weekend shared meal just didn’t interest me. Normally, I enjoy it – the poached eggs, the flowing coffee, the kicky cocktails, the displaced Brooklyn washtub bands strumming away. But I wanted to cook for friends this weekend and it wasn’t going to be ebleskivers and mimosas (again nothing against either).

Feeling nostalgic for the sounds of the pressure cooker working, oil popping, and meringue whipping that once dominated my weekend soundtrack, I planned a Sunday lunch instead. I consulted an old spiral bound menu cookbook Secrets of Cuban Entertaining by Rocio LaMadriz, Piedad Robertson & Olga de Zaldo that my aunt gave me a couple of months ago. Unusually organized by the number of people you’re hosting, in categories like “unusual but elegant” and “expensive but special”, I decided on the “simple” menu of pollo frito a la Criolla with espinacas a la Catalana.

A la criolla can mean a lot of things but in this case it’s mashed garlic with oregano, cumin, salt and pepper mixed with orange and lime juice and poured over chicken thighs then covered with onions and left to marinate over night. Quickly browned (mine went almost black), the chicken’s cooked slowly with the reserved marinade. Together with steamed spinach sautéed with garlic and tossed with pine nuts and raisins and white rice, I had my lunch. Friends become family in New York where everyone is from somewhere else so it made sense to linger together through the kind of hours long, family meals we all miss on Sunday afternoons. 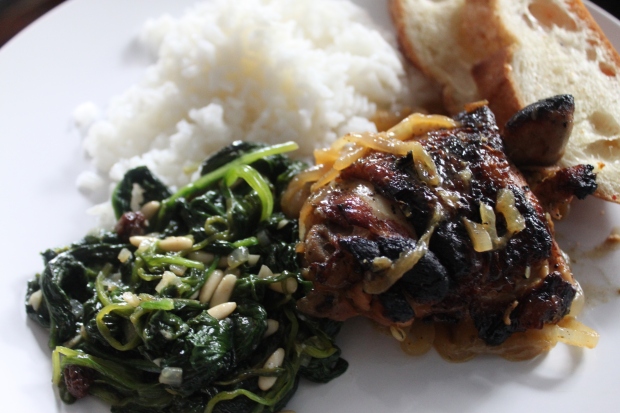 Pollo Frito A La Criolla/Creole Fried Chicken
Heavily adapted from Secrets of Cuban Entertaining by Rocio LaMadriz, Piedad Robertson & Olga de Zaldo. The name can be misleading because it’s fried but not breaded. After the initial browning, most other recipes called for braising the chicken over low heat and I wanted to avoid deep frying so I added those steps.

Once it’s cooked, the chicken can be removed from the pot and set under a preheated broiler for a couple of minutes to crisp the skin but should be watched closely.

Place chicken in a large mixing bowl. Using a mortar and pestle or food processor, mash or grind 3 garlic cloves with spices, salt and pepper into a paste. Combine with sour orange juice.  Pour marinade over chicken pieces, top with sliced onions, cover and refrigerate for at least 3 hours or overnight.

Let excessive marinade drip off chicken and blot with a paper towel.  Reserve marinade. Heat about a 1/2 inch of oil in a heavy skillet over medium-high heat until hot but not smoking. Add the chicken to the skillet, skin side down until well browned, turning once, about 6 minutes on each side. Do not crowd the pan and work in batches if needed. Set browned chicken aside.

Pour out all but 2 tablespoons of the oil and sautée the onions in the skillet until soft, about 5 minutes. Add the reserved marinade and bring to a simmer. Return the browned chicken pieces to the pan and lower heat. Cover and cook until the chicken is cooked through, about 20-25 minutes.

Heat olive oil in a heavy skillet over medium heat.  Sauté the garlic and shallots until soft, do not allow to brown, about 5 minutes. Add the spinach and cook until wilted. Season with salt, pepper, and nutmeg. Toss with raisins and pine nuts.