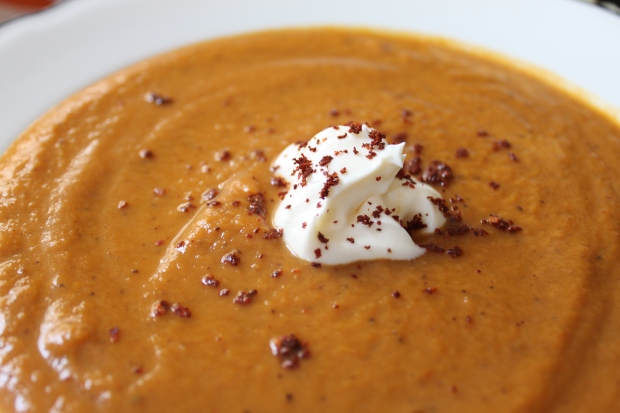 It was supposed to be a fairy tale.  I found a recipe for pumpkin and crab soup that I couldn’t wait to try, a Cinderella pumpkin I couldn’t wait to photograph, and pound of fresh lump crab meat I couldn’t help but splurge on.  Using a recipe that seemed pretty straight forward if a little vague, I roasted the pumpkin and scooped out a few cups – careful to leave the shell in tact so it could it be used as a tureen – then pureed it with scallions and coriander.  Combining the puree with broth, I added way too much curry (the wooden spoon I used still looks gold plated).  I made some adjustments but it only got the soup madder.  I was moments away from throwing good crab meat into bad recipe when I decided to give up on it altogether.

Having already wasted time, I couldn’t bare to waste any more food.  I’d never known Cinderella to chop up her pumpkin for the parts but, hoping there was enough left for another attempt, that’s what I did.  After the toil n’ trouble, the bar was raised to find something really unique to make with the cups of fresh pumpkin puree now draining in my fridge.  Looking for an interesting alternative, I saved the crab for another day and found a fairy godmother in culinary historian Maricel Presilla and her recipe for cream of pumpkin soup with cacao nibs.

Surprisingly, I had almost all the ingredients.  Though the original recipe called for cooking the whole pumpkin, I made some adjustments to use the puree on hand.  Most interestingly, Presilla includes a recipe for kekchi cacao-chile balls from the Kekchi Maya of Guatemala.  A combination of roasted cacao with piquin pepper, it’s mashed into a paste then formed into individual balls that are left to dry out then grated over foods for added fire.  Though she warns that only a pinch is needed, the scent of warmed cacao lulled me into a false sense of security (and they looked so much like truffles).  This notion was dispelled as soon as the piquin hit the pan, sending up an invisible cloud of pepper smoke that had us scurrying like mice to open windows and turn on fans.  I had to process it for awhile to form anything like a paste but eventually the nibs subdued (but didn’t conquer) the chiles.  With the smell of pepper still lingering in the air, it was like handling lava – definitely not truffles.

Finishing it off, I added a dollop of creme fraiche and cubed Manchego cheese.  Once again I was struck with how complex a simple soup can be.  Coming off my earlier failure, it was tempting to try something fool-proof and fast but I was happy I didn’t.  Roasted separately, the full flavor of the cacao nibs, guajillo chiles, and vegetables came through, cacao permeated the soup yet it tasted nothing like chocolate, and the piquin chili added heat but didn’t overwhelm the pumpkin.  No effort was wasted.  It wasn’t a fairy tale but there was a happy ending. 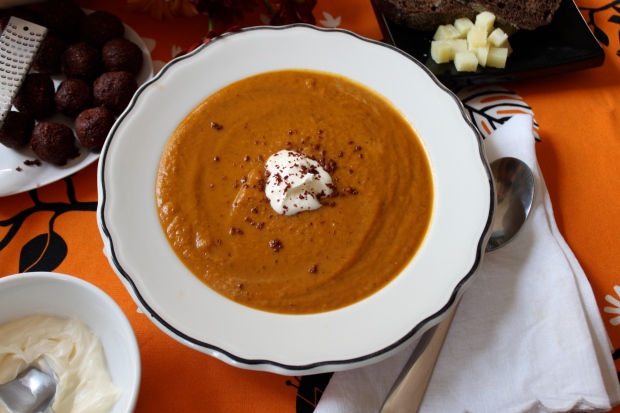 Crema de Calabaza y Cacao/Cream of Pumpkin Soup with Cacao Nibs
Adapted from a recipe by Maricel Presilla.  As I said, I made some adjustments so that I could use the roasted pumpkin I had on hand.  Click here for the original recipe using Caribbean pumpkin published by Gourmetsleuth on November, 2009.

Heat a griddle, medium-sized cast-iron skillet, or Mexican comal over medium heat.  Add the cacao nibs and dry-roast for 2 minutes, until fragrant, turning constantly with a wooden spoon or spatula. Turn out into another container and set aside.

Stem and seed the chile. Place on a hot comal, griddle or iron skillet and roast briefly turning with tongs, about 2 minutes. Place in a bowl with warm water to soften. Roast the tomatoes, onion, and garlic until blistered on all sides.*  Place in a food processor or blender together with the roasted cacao nibs and the spices and puree.

Heat the oil in a  medium, heavy-bottomed pot. Add the puree and the brown sugar and saute for 5 minutes. Add the pumpkin puree and the stock. Correct seasoning. Bring to a boil over medium heat, stirring constantly. Lower the heat and cover until the flavors are well blended, about 15 minutes. Puree in a food processor or blender, in batches. Strain the soup pushing the solids against the strainer with the back of a spoon. Put back in the pot and heat over medium heat. Add the chocolate and stir until dissolved, about 3 minutes.

Serve the soup hot garnished with a dollop of Mexican cream or creme fraiche and a tablespoon the cubed cheese. Pass the Kekchi Cacao-Chile balls and grate a pinch on the soup for extra heat and cacao flavor.

*Lightly drizzle tomatoes, garlic and onion with canola oil.  Place under a broiler until lightly charred, about 6 minutes.

Heat a griddle, medium-sized cast-iron skillet, or Mexican comal over medium heat. Add the cacao nibs and dry-roast for 2 minutes, until fragrant, turning constantly with a wooden spoon or spatula. Turn out into another container and set aside.

Add the chiles, cinnamon stick, and allspice berries to the griddle and roast the same way, stirring for 2 minutes. Scrape into an electric spice mill or coffee grinder with the salt and paprika; grind to a fine powder.

Combine the spice mixture and roasted cacao in a mini-food processor and process into a warm, sticky paste, stopping to scrape down the sides of the bowl. Scrape out onto a work surface and shape into 12 small balls. Let sit until thoroughly dried. Store in a tightly sealed jar.  When ready to use, grate over any dish of your choice.